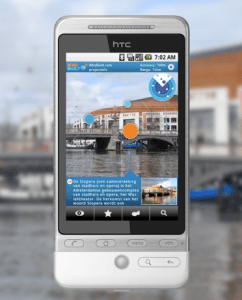 Augmented reality startup Layar is having a pretty good day. Not only did the Dutch company raise $3.4 million in a first round of venture funding — it announced that it has sealed a distribution deal with a major, yet to be identified handset maker.

Layar’s application turns your smartphone into a viewfinder, using its camera, and then layers data and information on top of whatever you happen to be looking at. For example, if you point your phone at a restaurant, the app could call up its dinner menu. Looking at a movie theater, you could theoretically view show times. Some developers are using the concept to design games. The company says that about 375 of these “layers” are available now, with 1,200 in development. About 2,000 organizations around the world are using the app in some way.

Layar says it will use its new money and clout to open up what sounds like an app store, stocked with free and paid augmented reality content contributed by outside producers and publishers. The deal with the handset maker, said to be in the top three in the world, will make it possible for millions more people to run augmented reality apps on their phones. Right now, few handsets on the market are capable of running something as complex as Layar.

Right now, Layar is only available on Android phones.It got pulled from the iPhone’s App Store in December because it was too buggy and people were complaining. This seemed like a disaster for the company at the time, but it appears to have rebounded, remaining a viable competitor with other augmented reality startups like Tonchidot and AcrossAir. A new and improved version of Layar is expected to reappear in the Apple App Store by the end of the month.

The recent round of funding came from Sunstone Capital and Prime Technology Ventures. It previously took in about $1.3 million in seed funding from Sunstone in November.