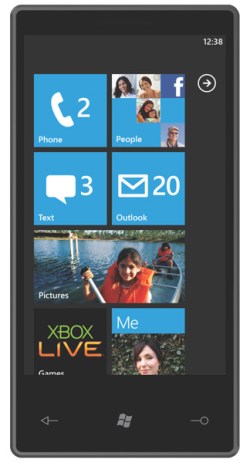 In one fell swoop, Microsoft has reclaimed its relevance in the mobile market. This morning, the company unveiled the Windows Phone 7 Series, its slick and modern upgrade to the aging Windows Mobile platform, at the Mobile World Congress in Barcelona. We’ve speculated that whatever Microsoft revealed at MWC would be the company’s last chance to make an impact in the mobile space — and from the looks of it, Microsoft is not wasting the opportunity.

A quick glance at the Windows Phone 7 Series interface makes one thing clear — this isn’t like any other mobile phone operating system you’ve seen before. Instead of aping the “icons on a grid” user interface that the iPhone came to own (and which was later expanded upon in Google’s Android OS and Palm’s Web OS), Microsoft is aiming for something completely different. And let’s face it, even Apple’s design could be considered a modern upgrade of the standard cell phone user interface we’ve been looking at for decades.

Microsoft has done away with the typical Start screen, and replaced it with a tile-based home screen that displays shortcuts to activity hubs, contacts, applications, and widgets. The emphasis on large text, 3-D transitions, and overall style makes it clear that Windows Phone 7 Series is based upon Microsoft’s radical Zune HD interface. But Microsoft has also integrated many features to round out the smartphone experience.

The OS is divided into six activity hubs that cover what most users would want in a modern smartphone. The “People” hub is the major social experience — which offers live feed updates from feeds, as well as the ability to post your own status updates to Facebook or Windows Live. Twitter wasn’t demonstrated at the event, but you can bet that it’ll be available come launch (there’s already a Twitter app available for the Zune HD). 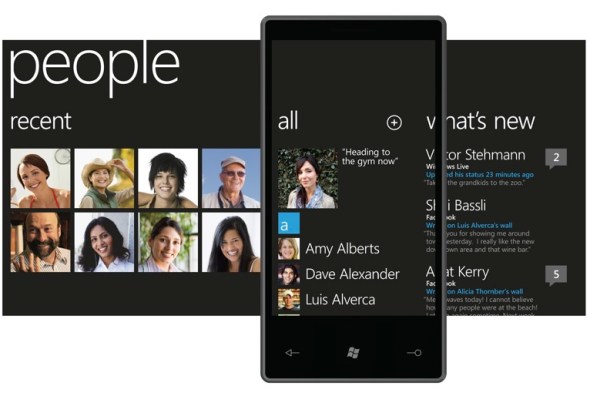 The “Pictures” and “Music and Video” hubs are fairly self-explanatory. The OS relies entirely upon the Zune HD interface for media, so you could very well call Windows Phone 7 Series the fabled “Zune phone.” For syncing media, you would use Microsoft’s Zune software on Windows (more on Microsoft ignoring Macs below).

The “Games” hub will likely be a favorite among Xbox 360 fans. The hub integrates Xbox Live into the OS, which allows you to check out gamer scores and achievements from your Live friends. And of course, it will be your go-to spot for games on the platform. Unfortunately, Microsoft didn’t demonstrate any games at Mobile World Congress, but we can expect further details to trickle out in the coming months.

Finally, there’s the “Marketplace” hub, which will be your destination for finding applications and games. Microsoft was strangely coy about the third-party application approval process, but after Apple’s app store troubles, we can likely expect a more relaxed approach.

Microsoft won’t be building any phones for Windows Phone 7 Series, but the company will be quite restrictive when it comes to approving devices from third-parties. For example, it will require capacitive multi-touch screens, and FM radios. There are likely further hardware requirements related to CPU and memory as well. After working so hard on the interface, Microsoft is also no longer allowing modifications of the OS, like it did with Windows Mobile. This means HTC’s gorgeous Windows Mobile skins are likely dead, but on the plus side consumers get a consistent MS mobile experience across every device.

Microsoft is also aiming big with mobile operators; carrier partners include “AT&T, Deutsche Telekom AG, Orange, SFR, Sprint, Telecom Italia, Telefónica, Telstra, T-Mobile USA, Verizon Wireless and Vodafone.” The partnerships are a challenge to Apple’s still AT&T-centric iPhone — and they will likely make Google sweat a bit as well, since Android has been fighting for a presence across all carriers.

The biggest problem for Windows Phone 7 Series so far is Microsoft’s contempt for Mac users. There are currently no plans to support Macs. Microsoft would also have to build a Mac version of its Zune software to support media syncing — something it has refused to do for the Zune devices so far. If it really wants to reclaim a stake in the mobile market, Microsoft will have to suck it up and develop for Apple’s platform.

Expect to be flooded with further details in the coming days and months. You can check out the full press release here.