Blogging startup Tumblr has spent years cultivating an artsy, young base of nearly 3.5 million users from its Brooklyn headquarters and held off from enabling comments until this month. Two weeks ago, it experimented with photo-replies for 48 hours and received such a positive response that the site turned them on permanently.

It’s adding in generic text comments today, but with a twist that only its social networking model can provide. The beta feature lets only those people that you follow respond to your posts, so only the people you’re actually interested in listening to can reply on your Tumblr blog. Tumblr has an asymmetrical following model like Twitter. People can follow other people without needing their explicit approval like on Facebook.

What makes this solution elegant is that it keeps trolls, or anonymous people who post inflammatory comments or spam, from overrunning a blog’s comments. If you don’t like someone’s comments, just stop following them. It’s simple. Tumblr users can enable replies by turning on the feature in their dashboard.

The company has raised $5.25 million in two rounds from Union Square Ventures and Spark Capital. 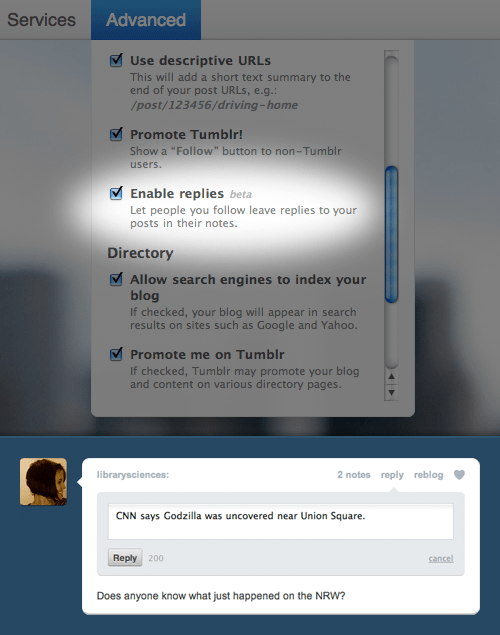