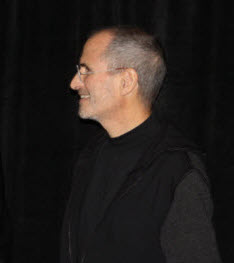 Steve Jobs is reportedly cooperating on a biographical book about himself, according to the New York Times.

The book is being written by Walter Isaacson, former managing editor in chief of Time magazine, according to anonymous sources in the Times piece. That’s a very interesting choice for a biographer, considering that Isaacson isn’t a technology writer or Silicon Valley insider. Isaacson is currently chief executive and president of the Aspen Institute, a nonprofit education and policy studies organization in Washington, D.C. He has written books on Albert Einstein and Benjamin Franklin.

There are lots of books about Steve Jobs. But they’re all missing a key ingredient: cooperation from Jobs himself. I’ve read many of these books over the years, from Steve Wozniak’s iWoz (which of course is about the Apple co-founder but has tales about Jobs) to The Second Coming of Steve Jobs by Alan Deutschman. There are many unflattering stories that have surfaced over the years about Jobs, as well as admiration. But in every book, I always wished that the writer had more access to Jobs himself. The challenge in writing about book about Jobs is to stay far enough away from the reality distortion field to get an objective view of the man and his life.

Apple declined to comment on the book to the New York Times. Given Jobs’ recent brush with mortality — he survived a liver transplant last year — it seems likely that he is concerned about the legacy he leaves behind and how his life is perceived.