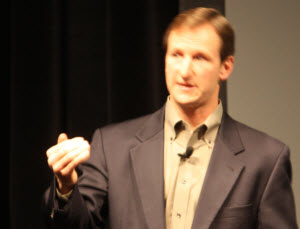 Disney dominates much of entertainment media, but it isn’t the king of video games.

Games are a very big part of Disney’s business. It uses its entertainment properties, from Hannah Montana to Disney characters, to come up with titles that delight Disney fans who are also video game players. In other words, the game division has done a great job milking Disney’s entertainment franchises. But the company is still struggling to be recognized as a force in its own right in games.

Steve Wadsworth, head of Disney Interactive Media Group, explained Disney’s approach to entertainment, including games, in a keynote speech at the Dice Summit, a game executive conference that starts tonight in Las Vegas at the Red Rock Canyon resort. (I’ll be posting frequently from the Dice Summit starting today through Friday). Wadsworth is the executive at Disney who is in charge of the company’s approach to the blending of the Internet, games, and entertainment. 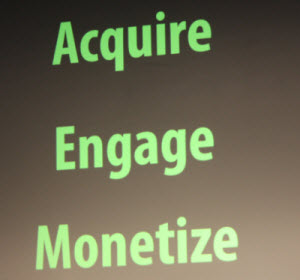 Part of the problem of producing great games is that the consumer is always a moving target. Consumers love great stories and that is what Disney is good at. But the company also has to embrace new technology, Wadsworth said, as Disney once did when it launched Snow White with the best of movie technology many decades ago.

“Consumers have more choices than they have ever had,” Wadsworth said. “Trying to rise above the noise to get the consumer’s attention is getting much much harder. And there are new forms of entertainment where people are paying very little money for them.”

In fact, games on iPhones and the web are often free. That presents the entrenched media companies such as Disney with a business model problem. Disney’s traditional approach: acquire, monetize, and engage. First, you get consumers interested in your product. Get them so interested that they buy it. And then keep them interested, or engaged. 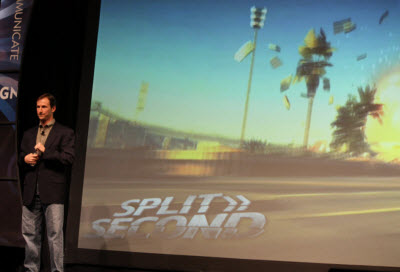 Now the model has changed to acquire, engage, and then monetize. Consumers who are engaged on a longer term basis will eventually be converted into paying customers. The new model is causing disruption and it requires companies to gain different skills to cope with the disruption.

The company is using cutting edge technology in its newest games. Big games coming from Disney are, Split Second, Tron Evolution, Epic Mickey, and a new Pirates of the Carribbean title. Those games will hit the traditional game consoles. On top of that, the acquisition of Marvel Comics will add 7,000 new characters that the company can launch new content around.

Disney is still investing in massively multiplayer online games for fans who want to play deep experience in a social context online. It has a number of MMOs and worlds already launched: Pirates of the Carribbean, Club Penguin (kids virtual world) Disney ToonTown Online, Pixie Follow. Soon, it will launch the World of Cars.

But the audience of the future will demand different experiences. Kids today are multitaskers, Wadsworth said. They’re media sponges, absorbing 11 hours of media a day, and half of that in digital forms. They want things now, on multiple platforms, with sharing and seamless communication.

“It takes new skills and flexibility to address this audience,” he said.

Players today won’t stand for long downloads. They want immediate gratification. Disney bought Club Penguin 2.5 years ago for $350 million plus earnouts. The most important thing it learned was that the Club Penguin team constantly communicated with kids about what they needed, Wadsworth said.

Disney used to send auto-reply emails to consumers who sent in new ideas. It rejected those ideas out of hand because it was rigid about having to own its intellectual property outright. That was a lesson from another age. Now, kids have an expectation that they will be heard and that they will shape any service they use.

“If customers don’t feel like they are being heard, they will vote with their feet or pocket book and go somewhere else,” he said. 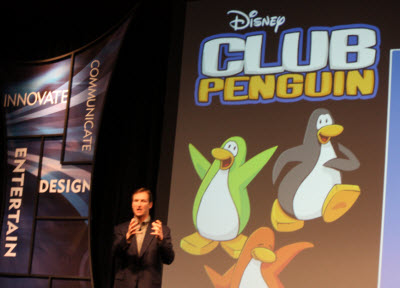 Data mining consumer info to get real-time analytics is the new norm. Franchises are now no longer set in stone. Rather, they have to become interactive experiences that change with the times and the audiences. Disney now tries to create a continuous storyline for a property that extends across platforms, like a game that starts on the Nintendo DS and moves to the iPhone. If this is done right, the consumer might pay to be entertained by the same franchise over and over again across different platforms.

Disney has sold 1.5 million Club Penguin games on the DS and kids have uploaded more than a billion coins from that game for use on the online Club Penguin site. You’ll see more of this kind of content from Disney. Tomorrow, Disney is announcing a Club Penguin DS game sequel that will be even more integrated with online play.

“A new model is emerging,” Wadsworth said. “Some things will not change,” like storytelling engagement. But building a business around that engagement will be different.

After the speech, I asked Wadsworth how Disney can catch up on a platform like Facebook, where brands are not popular at all. Wadsworth said the company should focus on its core competency and target the platforms where it can succeed, rather than chase everything. Facebook is hot.

“Will we be there? Eventually,” he said. But only when the company has something right for the platform, he said.