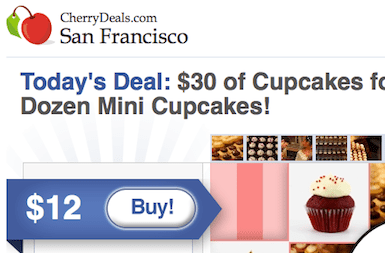 Virtual goods, whether you’re buying raspberries for your Farmville or any number of equivalent purchases, are a gigantic and growing source of revenue for companies trying to make money on Facebook and other social gaming sites.

Taking full advantage, Peanut Labs Media, a company helping social and massively multiplayer game companies monetize, just launched Cherry Deals, to make buying virtual goods a little easier and a little more rewarding. Peanut Labs combines a few elements of Groupon, shades of Foursquare, and a big heap of social gaming to create a way for the worlds of virtual and physical goods to meet, in a way that benefits all parties.

It works like this: Every day, within games from the 200 publishers Peanut Labs is partnering with, players will be given a deal in a local store or service — Cherry Deals uses your IP to figure out where you are, and tailors the deals locally. The deals all offer more than 50% off of something, whether it’s cupcakes or a massage or something else entirely. Like Groupon, you can buy the coupon on the day it’s available, and then use it whenever you want.

Cherry Deals has a standalone Facebook application, which seems to compete pretty directly with Groupon, but its integration within social games is what makes it special. Gamers can buy the deal from directly within the game they’re playing. And in addition to getting the real-world coupon, gamers automatically receive virtual game credits as part of the transaction, which can be used to buy virtual goods in the game itself.

For users, this means that their money is working double, getting them both a great deal at a local store and the virtual good they’d be buying anyway. For publishers and advertisers, the possibilities are even better: publishers get higher margins and more revenue, taking a cut of every coupon sold, while local companies get to put their product in front of huge numbers of social gamers. Peanut Labs claims its partners have 80 million players between them, with over 50 million transactions happening each month, which is a huge audience for any company wanting to offer a deal.

Groupon has proven to be a huge player in the local space, and Cherry Deals, without changing a lot about the model, wants to take advantage. Offering the “daily deals you can use whenever” has been great for Groupon and great for the businesses that participate. By integrating the same idea into Facebook and into social gaming, Peanut Labs could be in a position to bring the model to a whole new group of people, giving virtual goods some real-world value. Not to mention the progress it might make in getting gamers like me to go outside once in a while.

Cherry Deals is US-only for now, but Peanut Labs plans to extend it internationally soon. The company is located in San Francisco and raised $3.2 million in funding in 2008. 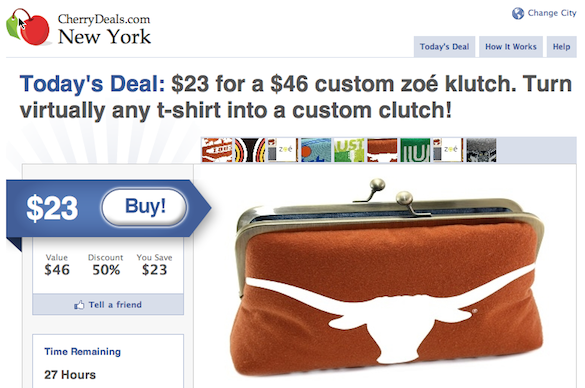