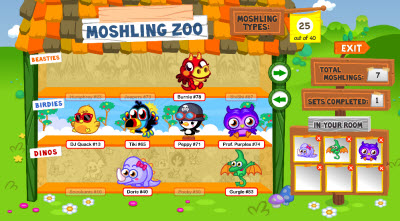 For many years toy and video game companies have been battling each other for the mindshare of kids.  Toy companies have strong products targeted at children from pre-school up to about second grade, when they turn 7 or 8.  Then, at about age 8, video games start to replace traditional toys.

The typical business model enables video game companies to license their products to toy companies to generate additional revenue.  At the same time toy companies have been offering more interactive toys to reach the slightly older child.  Media companies like Nickelodeon, Cartoon Network and Disney have effectively found a way to provide programming for both the younger and older kids and license their properties to toy and video game companies who in turn use their networks to market back to kids. After Disney bought Club Penguin for $350 million plus earn-outs in 2007, a wave of kids virtual worlds copycats materialized. 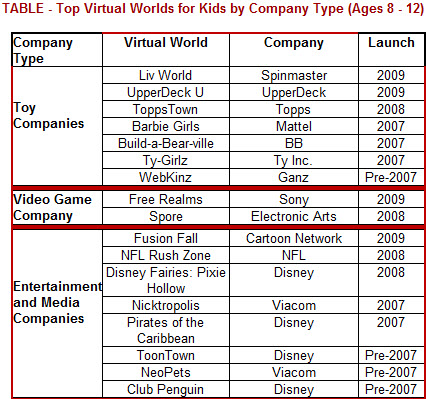 Over the last few years, an entirely new competitor for children’s time has come onto the market – the online gaming world.  Several independent companies have figured out how to capture the attention of the 8-12 year old child in a completely new way — through virtual worlds and online gaming experiences.

Take a look at all the gaming worlds started by independent companies that have been introduced over the past several years.  In 2008, there were 14 new virtual gaming worlds for kids 8-12 introduced in the U.S.  Over 70 percent came from companies not in the traditional toy, entertainment or video gaming space.  And, with the exception of the NFL and Disney Fairies, the majority of these virtual worlds were completely new brands, with no prior brand recognition with kids. 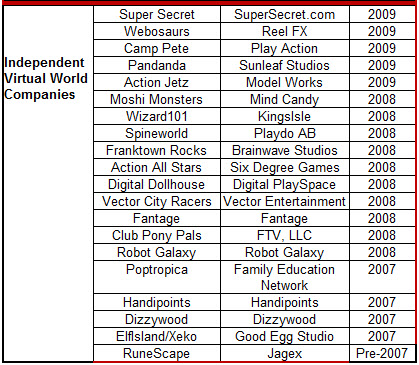 Then in 2009, we saw a few of the larger companies entering the market.  Sony introduced Free Realms and Cartoon Network introduced Fusion Fall.  Both these companies used their existing resources to help propel these properties to the top of the list in 2009.  Still, many of these brands were new to kids.

Of the top virtual world game sites that currently have over a million visitors a month, the majority of top performers were started by smaller, independent companies.

As we move into 2010, M2 Research predicts several key trends for the online gaming space for kids:

To date, the toy companies have been relatively quiet.  The online space with a direct-to-consumer relationship is a relatively new concept for these companies. They have been building up their expertise the past few years and figuring out the best solution for each of their brands.  The challenge for toy companies will be to find a way to participate in the world in a way that is not a “me-too” application.  Barbie Girls, Build-A-Bear Ville and Webkinz have shown the potential.  Expect to see toy companies entering this market in a big way in 2010.

2. Entertainment companies have a head start and will continue to dominate in 2010.

Disney, Nickelodeon and Cartoon Network have done exceptional jobs at building a complete gaming platform for kids online from casual games to more involved virtual worlds.  They cover the casual gaming markets with sites like nick.com, addictinggames.com and cartoonnetwork.com. And the majority of the entertainment-based virtual worlds come from these three.

3. Independents will continue to be plentiful, but face a tough challenge with more well-known brands coming into the market in 2010.

The majority of the new worlds in the past have been from independent companies, many funded by venture capital.  As long as funding remains in place, these worlds will continue to grow.  But, new entries will have more of a challenge, since they will be up against some big brands in 2010.

4. Video Game companies are the wildcard in 2010.  What will Nintendo do?

Video game companies have an interesting challenge in protecting their existing console business, while at the same time participating in this growing kids market.  The Xbox Live and the PlayStation Network have typically targeted the over 18 market, with the average player being close to 29 years of age and male.  The big question is what will Nintendo do? The Mario series is one of the top video game franchises for boys 8-12. Will they go beyond the Wii Virtual Console [for playing downloadable games on the game console] and into the more immersive virtual world market with kids?

This post originally appeared as a post on M2 Research, where the author is a senior analyst tracking children’s games and online worlds. 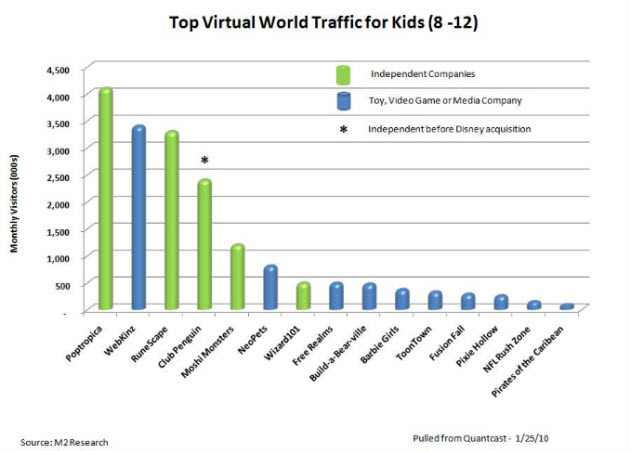