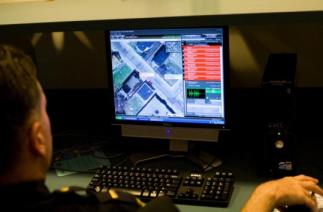 On Wednesday morning, a small private plane ran into power lines in heavy fog over East Palo Alto, in Silicon Valley. The plane burst into flames and broke up, scattering fire onto a day care center, a home, and three cars, according to first responder reports. Killed in the crash were three employees of high-profile electric car maker Tesla Motors, based in nearby San Carlos.

Now, investigators for the National Transportation Safety Board — the same agency investigating the alleged mechanical problems in Toyota’s cars — is combing through the crash, looking for clues as to what happened. The NTSB has discovered that an electronic gunfire detection system installed in parts of East Palo Alto, famous for topping the nation’s per capita death ratings in 1992, picked up the sounds of the plane and its crash, according to an AP wire report:

The sound system was designed to help locate gunfire but also picked up the Cessna as it slammed into a set of power lines shortly after taking off in dense fog Wednesday, National Transportation Safety Board investigator Josh Cawthra said.

Cawthra said the recordings could give clues to any mechanical errors, allowing investigators to hear sound levels of the engine and propeller noise. It’s the first time he’ll use such data in a crash investigation.

East Palo Alto police installed a ShotSpotter system in late 2008. The ShotSpotter, which cost the city an estimated $200,000 or more, consists of a system of 16 to 20 specialized microphones installed over each square mile of the city covered.

When we heard that a plane had crashed in an East Palo Alto neighborhood, all of us at ShotSpotter knew there was a high probability the city’s ShotSpotter Gunshot Location System had detected the incident.

I couldn’t get the total number of sensors in East Palo Alto, but ShotSpotter’s head of marketing and sales said in a prepared statement that the system was installed in the most violence-prone neighborhoods. The system has helped police detect and locate shootings as they occur.

VentureBeat started writing about ShotSpotter back in 2006 and 2007. ShotSpotter’s website includes a Google map of installed sites.