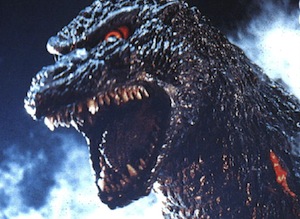 Mike Maples Jr., an early backer of popular web startups like Twitter and Digg, ended today’s Future of Funding event in San Mateo (co-sponsored by VentureBeat) with a passionate keynote urging attendees to either found or fund “Thunder Lizard” companies.

Those are the companies that defy conventional venture wisdom, which says you either make small bets for a small payoff, or big investments for a big payoff, Maples said. Like Godzilla, Thunder Lizards start out small, but thanks to the power of technology, they’re soon crushing cars — or incumbent competitors.

“You could raise a tiny amount of money and be hatched by atomic eggs,” Maples said. “In fact, I would argue that the vast majority of truly great companies have done it that way.”

On the surface, it might seem like Maples’ ideas could be boiled down to “think big,” but Maples tied that vision to a specific investment strategy. He said that there are eight factors he looks for in Thunder Lizard companies, four of them involving the company’s DNA:

The other four factors involve the company’s attitude, and they are:

When it comes to the vision, Maples said entrepreneurs need to be both unconventional and right. The requirement to be right is obvious: If you’re wrong, your product probably won’t go anywhere. But it’s almost as bad to be right in a way that matches consensus beliefs, because then you’re going to face lots of “mindless competition.” Especially since there’s “too much money in the venture business,” so lots of “me too” companies will get funded. When entrepreneurs come to Maples for an investment, he asks, “What insight do you have that is not yet the conventional wisdom?”

Tying into that is the idea of offering something that’s truly different, not just a better version of a product that already exists. If you’re different, it should be pretty obvious to potential users, whereas it’s pretty hard to convince someone that you’re better, even if it’s true. And being different sticks, while a better product can always be beaten by something better still, especially if the competition has more money. Maples made fun of pitches where an entrepreneur said, “I do photos online, but my photos are 50 percent higher resolution than the other guy’s resolution!”

Everyone laughed, but Maples added that if most people were honest, they would admit that many of the companies that they wanted to start or that they invested in fell into that category.

It was a rousing speech, but afterwards, some audience members questioned Maples’ ideas. Dave McClure of Founders Fund, for example, said he shares Maples’ philosophy, except that McClure makes more investments of smaller size compared to Maples, who makes fewer investments for more money. McClure argued that his style is a better fit for the visionary, gut instinct investment ethos that Maples was pushing for.

Another questioner asked if Maples ever forced his philosophy on an entrepreneur, in the sense of blocking an early acquisition. Maples said he would never do that. Instead, when he’s interviewing entrepreneurs, he tells them, “If you go sell this thing to Google for $20 million in six months, I’m going to be kind of pissed.” Sure, sometimes that’s what the circumstances call for, but if that’s your initial vision, “What are we talking for?”