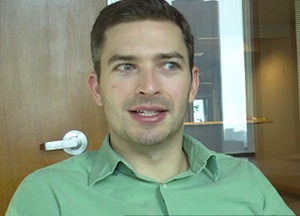 Aaron Patzer, who founded Mint.com and served as its chief executive until it was acquired by Intuit for $170 million, stopped by the VentureBeat office this week to talk about his new job and about his vision for the future of personal finance. Patzer is now Intuit’s vice president and general manager of personal finance, which means he’s in charge of both Quicken and Mint (which is continuing as a separate product).

“The good news is the whole Mint leadership is over at Intuit, and I run the division,” Patzer said. “So Intuit’s vision for personal finance is our vision of personal finance. We get to define it. So that means we control what the next versions of Quicken are going to be doing, and Mint as well.”

In the video below, Patzer talks about founding Mint, moving to Intuit, and what features are coming in the months ahead.

Going forward, VentureBeat plans to run a video interview with a CEO every Thursday. Okay, we’re breaking the rules with our very first video, but come on, Patzer gets in by virtue of being a tremendously successful entrepreneur. And a big thank you to both Patzer and to you for putting up with some of rough spots as I figure this whole video thing out.