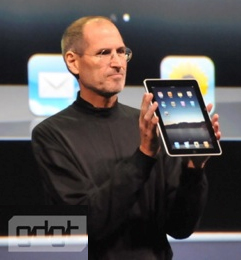 Update: Apple expert John Gruber, cited below, wrote in to say his sources told him the Flash image in an iPad demo, now removed from Apple’s website, was a mockup, and that Apple engineers left Flash support out of the iPad from the start. I’ve removed a paragraph that claimed Flash already works on the iPad.

One of the biggest controversies over Apple’s forthcoming iPad tablet is that the iPad doesn’t support Adobe’s Flash interactive animation technology.

A few days after unveiling the iPad in a live demo event in San Francisco, Apple’s benevolent dictator met with Wall Street Journal editors to discuss the future of media in an iPad world. One of the attendees leaked select Jobs quotes to Silicon Valley gossip site Valleywag.

“We don’t spend a lot of energy on old technology,” Jobs said when asked about Flash support. He called Flash a “CPU hog,” complained it was full of “security holes,” and concluded that Flash is a dying technology, rather than the de facto standard for online video, which Flash has been ever since Flash-based YouTube became the de facto site for watching clips. Internet users install or upgrade their browsers’ Flash plugins in order to see a hot YouTube clip. From then on, nearly all Flash-based Web content works for them, because everyone else builds to the current YouTube Flash version. (Apple pundit John Gruber has detailed Flash’s problems on Apple computers.)

Not to worry, Jobs told the Journal. “It’s trivial to create video in H.264,” he said, in order to serve WSJ video content and ads in a format designed for Apple’s Quicktime instead of Adobe’s Flash.

Compared to, say, designing and building a tablet computer, it’s trivial. But it would be even more trivial for Apple to support Flash in the iPad — they’ve already done it — and then watch the supposedly old, dying technology fade away from the Internet.

Who is he kidding? Jobs knows Flash isn’t dying, it’s taking off like crazy, delivering an estimated 3 out of 4 Web videos. Jobs has deliberately chosen to remove Flash support from the iPad as an incentive to force Web content publishers to ditch Flash from their sites. That’s why longtime Journal columnist Holman Jenkins, whose focus is on business rather than technology, compared Apple’s anti-Flash crusade to Microsoft’s 1990s technology lockouts of competitors:

“Apple and its supporters stake out aesthetic and philosophical grounds: Flash is buggy. Flash is a power hog. Flash is “proprietary” (horrors). Flash is used to create those annoying Web ads (never mind that advertising is what pays for most of the Web).

“Flash would also allow iPhone and iPad users to consume video and other entertainment without going through iTunes. Flash would let users freely obtain the kinds of features they can only get now at the Apple App Store.”

One more thing … It’s popular among Apple evangelists, Gruber included, to claim that people who want Flash support are idiots who only use the Internet to watch Hulu, and who — ultimate geekboy insult here — like advertisements done in Flash. You like ads!!!

Sigh. How can smart people be so stupid? If Jobs successfully scrubs Flash from the Internet, future video ads will be uploaded and served in scintillating, widescreen, high-def H.264 format, bigger and better than ever. I hear it’s trivial.