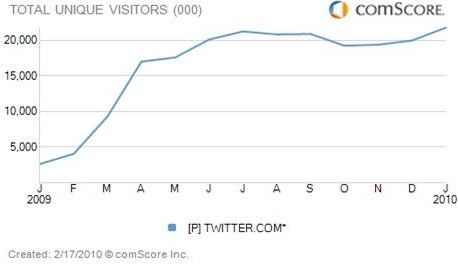 After the launch of Google’s real-time search, in December, I predicted that Twitter would get a boost in traffic after declining visitor counts since peaking during the summer of 2009.

ComScore data show the number of unique visitors to Twitter increased by 9 percent from December 2009 to January 2010. The 21.79 million unique Twitter visitors in January was an all-time high, just over the 21.25 million visitors that comScore tracked in July 2009. December 2009 unique visitors were up 3.1 percent over November, so Google’s real-time search, which launched on December 7,  appeared to have impact on Twitter for the month of December as well.

Data from Experian Hitwise data suggest that Google is the main source of the additional traffic — the share of Twitter’s traffic coming from Google increased by 9 percent when comparing the week ending December 5 to the week ending February 13 (from 12.8 percent to 14 percent). Hitwise showed a modest increase of 5 percent in market share of US visits to Twitter in that time period. 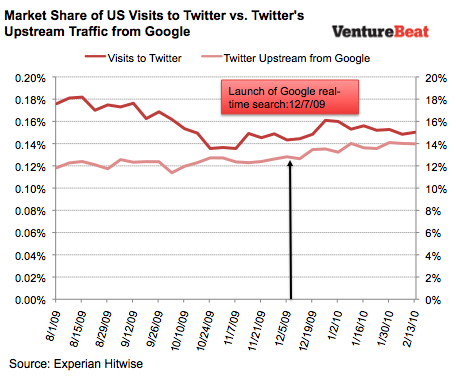 It’s no surprise that Google launched Buzz last week after paying an estimated $15 million for Twitter’s feed. Certainly Google wants to keep more of that traffic in its own network, where it can serve users more ads.

However, this new data is encouraging for Twitter — it is maintaining its US share while growing internationally and growing the use of its service on third-party applications through its APIs. With a completely open social network where users can have as much control as they want over the amount of personal information they share, Twitter has got a lot going for it over Google Buzz. Unfortunately, since Google Buzz is embedded in Gmail, we won’t be able to measure its impact. If someone does come up with a reliable way to measure Google Buzz, let me know!