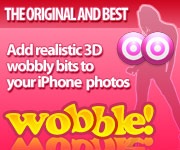 Blogger Jon Atherton at iPhone app developer Chillifresh has become the de facto spokesman for those who think Apple’s new anti-smut rules for iPhone apps are too puritanical. Chillifresh’s arguably sexist — or maybe just kind of dumb — Wobble app was one of those hit by Apple’s cleanup campaign this past week.

On Saturday, Atherton claimed Apple had banned 5,000 apps, and quoted these restrictions said to be straight from an Apple representative:

I have spoken with Apple, and the following are the new rules:

1. No images of women in bikinis (Ice skating tights are not OK either)

2. No images of men in bikinis! (I didn’t ask about Ice Skating tights for men)

3. No skin (he seriously said this) (I asked if a Burqa was OK, and the Apple guy got angry)

4. No silhouettes that indicate that Wobble can be used for wobbling boobs (yes – I am serious, we have to remove the silhouette in this pic)

6. Nothing that can be sexually arousing!! (I doubt many people could get aroused with the pic above but those puritanical guys at Apple must get off on pretty mundane things to find Wobble “overtly sexual!)

7. No apps will be approved that in any way imply sexual content (not sure how Playboy is still in the store, but …)