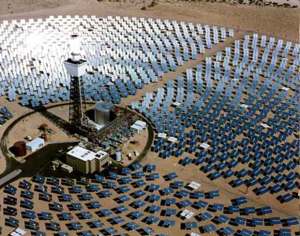 BrightSource Energy, one of the companies making solar thermal energy look better and better, has just landed a $1.37 billion loan guarantee from the U.S. Department of Energy. It will use the funding to build three utility-scale plants pumping out 400 megawatts — enough to light up as many as 140,000 homes in California. These projects alone would double solar thermal’s presence in the U.S.

Based in Oakland, BrightSource has been talking about its large Ivanpah Solar Energy Generating System for a while now. In September, it contracted engineering giant Bechtel to help with the construction — and provide additional capital to give it the runway it needs to build 2.6 gigawatts worth of solar thermal facilities elsewhere. Before the deal with Bechtel, it looked like BrightSource might run out of money before fulfilling all of its commitments. Now, the new government money will give it even more bandwidth.

Differing from standard photovoltaic arrays, the three-plant Ivanpah complex (poised to become the largest solar thermal development in the world) will consist of fields of mirrors, called heliostats, that concentrate sunlight on “power towers” (pictured above). These towers contain liquid that is rapidly converted into steam to turn turbines.

Because solar thermal plants eliminate the need for pricey silicon solar panels, they are generally more cost effective. Companies like BrightSource could eventually give photovoltaic competitors like First Solar and Solyndra a run for their money. On top of that, it has already struck power purchase deals with Pacific Gas & Electric and Southern California Edison — also giving it a competitive edge.

Of course, the company still needs to hit certain financial and environmental milestones, if it wants to actually get its money from the DOE. Most importantly, its plans need to pass through local and state governments, in addition to the Bureau of Land Management, which technically owns the land in question.

BrightSource has already hit a minor speed bump related to environmental compliance. The company has shaved 500 acres (and about 50 megawatts) off of its original Ivanpah blueprints to accommodate an endangered species of desert turtle — though some interests still want it to relocate entirely. The land involved in the deal, located in California’s Mojave Desert, has raised a lot of concerns from environmentalists. Senator Dianne Feinstein has even pitched legislation to turn some of the region into a protected monument to prevent further renewable energy development, a motion that could impact BrightSource’s future expansion.

The Ivanpah complex will be built in several multi-year phases. The company plans to break ground on the first plant in the second half of this year, and to have it up and running by 2012. Construction for the second and third plants will begin in 2013. All told, the project is expected to employ 1,000 workers during the building process, and 86 staff members long-term, which could sweeten the deal for local regulators.

BrightSource will no doubt be helped along by its powerful backers, a group that includes Google, Morgan Stanley, Chevron and BP.