Any busy executive or entrepreneur knows the headache of e-mail overload. No matter how fast you reply, it just keeps coming. Inevitably, you lose touch with people you never meant to ignore.

A Y Combinator company called Etacts is offering one solution. It keeps track of who you’ve e-mailed or called and then sends you occasional reminders to stay in touch.

It works by importing the recipients and titles (but not the body) of all the e-mail you’ve ever sent and ranks them by importance or the number of times you’ve communicated with that person. Then you can set reminders, so Etacts can send you a note once a week, month, quarter or year to keep up the relationship. Right now, you have to log-in to Etacts to get the reminder but the startup will launch a weekly digest that will be e-mailed later this week.

Etacts also operates with phone records if you want to share your calling history. (Etacts has a deal with AT&T at the moment, but not the other carriers, to import call records.) There are also Etacts browser extensions for Firefox and Chrome that let you mark e-mails you wanted to be reminded about, so you can keep track of whether the recipient actually responded. There’s even a mail merge-style function that lets you create templates for networking e-mails you might send out repeatedly.

The plan is to operate on a freemium model, with extra features like LinkedIn and Facebook integrations along with an option to manage multiple accounts. Etacts’ model obviously has more of an opportunity in the professional networking space, and could work alongside tools from companies like LinkedIn or Salesforce.

“The customer relationship management industry is really ripe for disruption,” said co-founder Howie Liu. “All the CRM apps out there are fairly dated and old, not intuitive, and they’re not designed for the end user.” 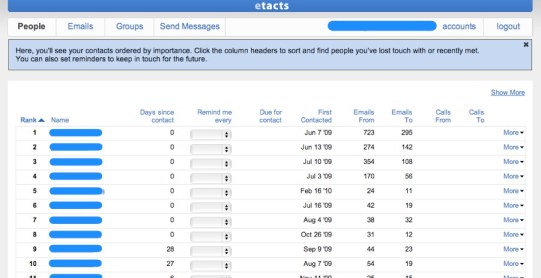