Syncing documents among multiple computers and smartphones is a pain in the kisser. SugarSync, which offers subscription sync services for as low as $4.99 a month, has added a clever feature based on everyone’s favorite ad hoc backup mechanism: You can now email it in. Send an attachment to your SugarSync account from your computer or smartphone. SugarSync will automatically sync it to your other devices. 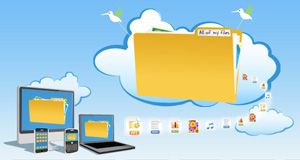 “We’ve had many requests for higher-storage accounts,” CEO Laura Yecies wrote in a press release scheduled to go out soon. Yecies said that camera-equipped smartphones are driving the demand for more virtual disk space.

SugarSync, based in San Mateo, Calif., was founded in 2004. The company has raised $26.5 million in three rounds of funding, most recently a $10 million round in January 2009 led by Draper Fisher Jurvetson, Selby Venture Partners, and Sigma Partners.