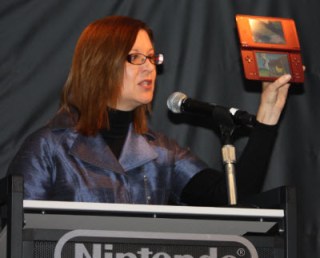 Nintendo of America announced this morning that it will begin selling the Nintendo DSi XL starting March 28 in the U.S.

The new version of the portable game handheld will have a 93 percent bigger screen and sell for $189.99. The screen is viewable from the side and so it will create a more social experience, said Cammie Dunaway, head of marketing and sales at Nintendo of America, at the company’s media summit this morning.

The DS remains the most popular handheld game system, selling a record 11.2 million units in 2009 worldwide. But Nintendo isn’t resting on those laurels.

The company also showed a demo of its upcoming Wii game, Super Mario Galaxy 2, one of the biggest games coming for the industry in the first half of 2010. The 3-D platform game has new features such as the ability to drill through a planet to move quickly to the other side of a world. It will also have Yoshi dinosaur characters to let you move faster and fly through worlds. The game launches May 23. The other big game of the first half, Metroid Other M for the Wii, will debut on June 27.

New titles for the DS include an America’s Test Kitchen cooking game and book-reading app that gives you 100 classic books to read on your DS. That, of course, is a nod in the direction of the popularity of electronic book readers such as the Amazon Kindle. We’ll see if all of this is enough to stave off growing competition from Apple with its iPhone, iPod Touch and iPad products.

Sin & Punishment: Star Successor, a follow-up to a successful downloadable WiiWare title, will launch on the Wii on June 7. That’s a shooting game. FlingSmash for Wii will arrive in the summer. Pokemon Heart Gold and Pokemon Soul Silver will launch on the DS on March 14. Puzzle game Picross 3D on the DS will debut in March.

New downloadable WiiWare games will be coming as well. There are 127 WiiWare titles already. WarioWare D.I.Y. arrives on March 28. Artist games Light Trax and Rotozoa are also coming for the WiiWare platform this spring. Nintendo is publishing those titles.

Capcom is releasing its Megaman 10 game on March 1 on the WiiWare platform. Max the Magic Marker is coming on March 8. Cave Story, an indie hit on the PC, makes its debut on WiiWare on March 22. Super Meat Boy arrives on WiiWare in the summer. And Yet It Moves, which started as a student project, will be out this summer on the WiiWare platform. Rage of the Gladiator comes this spring and takes advantage of the Wii Motion Plus.