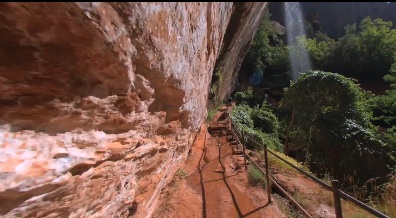 Have you ever thought how cool it would be if your treadmill could take you on a virtual jog through nature so you could watch something more scenic than the gym wall while you run? Well, your day is coming.

Virtual Active, which lets you access a library of running, hiking, and biking workouts filmed live in beautiful outdoor locations, is releasing a free half hour sample of its virtual exercise experience for download on iTunes on March 1.

Virtual Active is also working with cardio equipment manufacturer Johnson Health Tech, the #4 manufacturer of cardio equipment, and The Indoorcycling Group, a leading European indoor cycling company. Johnson’s 7xe line of Matrix Cardio equipment will automatically adjust the treadmill incline to mimic the terrain in the video, adjust the speed of video playback based on the user’s running speed, and provide on-location nature audio (in the case of cardio-enabled downloads, the video would not be able to provide such interactivity). In addition, these manufacturers plan to introduce SyncStep, which will allow users to hear the sounds of their steps over the terrain as they run or walk. For example, when running on a wooded trail, the user might hear crunching leaves underfoot each time their foot hits the tread.

The company has perfected filming while running at 12-14 mph paces for smooth video playback, all shot in HD. Virtual Active will also be introducing its commercial equipment to health clubs on March 10 at the International Racquet and Sports Club Association (IHRSA) fitness trade show in San Diego.

Videos of the location-based workouts, which include Yellowstone, Yosemite, Niagara Falls, Mount Rushmore, and the Grand Tetons, will be sold on DVD for $19.95, as downloads for $9.95, on Blu-ray disc or as part of specially-equipped cardio equipment packages.

The company will be launching their full online store May 1, where users can downloads instructional videos by fitness professionals as well as upbeat workout tunes from music provider Rumblefish, which can be played on any iPod-compatible fitness equipment or can be burned to DVD and watched at home.

The company’s business model is a mix of software sales and manufacturing partnerships on which it is paid per unit of cardio equipment sold as well as the majority of the revenue from additional content downloads. It also has a Passport Player, a standalone web-connected media player that health clubs can install to conduct classes and would be based on a monthly subscription. In addition, it is exploring brand associations and partnerships, in which a billboard along a running route or the instructor’s fitness gear would be provided by a sponsor. I was able to view some mockups, and these opportunities are not at all intrusive to the user’s fitness experience but offer brands prominent product placement throughout the video.

Johnson Health Tech and The Indoorcycling Group also have a partnership with Livestrong that will include Virtual Active’s content for Livestrong-branded equipment.

Virtual Active was founded by John Ford, who is a runner and has also played competitive soccer, after he left his job in corporate accounting at Clorox, in 2006. The company is based in San Francisco and has 10 full-time employees. The privately held company has received $2.5 million in funding from friends and family to date. Most competitors, such as Trixter and Expresso, focus on cycling, whereas Virtual Active is focusing on the full range of cardio equipment, including mountain biking, running and hiking for treadmills and ellipticals, and steep hiking on step machines, said Ford. “By Fitting entertainment to a person’s favorite exercise and not making them change modalities,” Ford believes the market for Virtual Active is quadrupled.

While all the locations filmed are in the US, The company will be filming locations in Germany and Italy in April and Australia and New Zealand later this year. It hopes to film locations all over the world, said Ford. Ford said his goals for the company include acquiring some powerful brand partnerships, expanding the content library to cover the globe, and increasing Virtual Active’s distribution to every place screens exist in the fitness world.