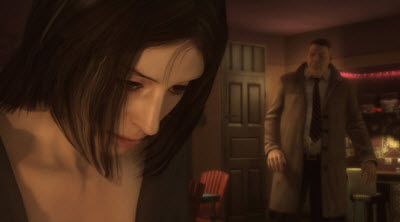 “Did I really just do that?” I ask myself, part way into playing “Heavy Rain,” the new, uh, video game for the PlayStation 3.

Moments before, I faced a unique problem—unique to video games that is. A baby was crying. She had a dirty diaper. And her mother was unable to car for her. In order to advance the game, I had to mash a few buttons in proper sequence to change her diaper. Call it The Diaper Combo.

“There you go, fresh new baby,” our hero triumphantly said, after I quickly mastered the challenge. It was then implied that I would need to feed the underdeveloped mammal. Having never done this before (in a game), I smiled at the prospect. But I wonder: Is this even a video game?

No, says designer David Cage, attempting to distance his work from more popular alternatives. “This is not a video game,” he answers bluntly. “For 20 years, the video game industry has defined interacting as shooting. When I told some publishers that my heroes would not have weapons, they were puzzled. ‘What type of video game could it be if you cannot shoot?’ they asked.”

There is a story here. In the plot, a serial killer is loose. People go missing and four days later, their bodies are found. An origami creation on the body is the only clue. Another person goes missing, and the player has to solve the mystery before the next body appears. 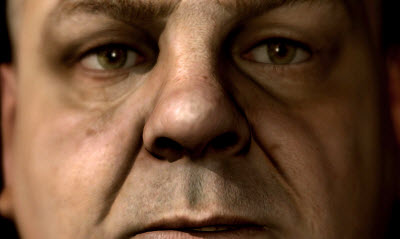 In a traditional sense, Cage is right about how this is not a game. I have no weapon. I don’t drive cars. I can’t jump onto platforms, and there are no magical mushrooms. If I die, there isn’t a game over screen—I simply take control the next living character.

But I’m playing this whatchamacallit on a machine called a “PlayStation,” with a joypad even, so surely it’s a video game.

It most certainly is, says game consultant Adrian Crook. An adventure game to be exact. “‘Heavy Rain’ is an innovative throwback to adventure games like ‘Countdown,’ ‘Full Throttle,’ and ‘Myst,'” he says. Like “Heavy Rain,” some of the best adventure games “were primarily cinematic experiences that were visually stunning for their time and easy to enjoy because they lacked complex control schemes.” 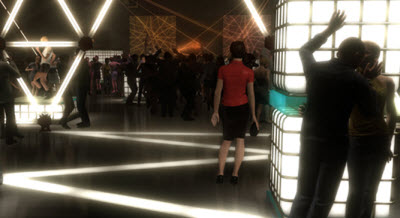 In other words, it’s a familiar genre in new clothing. “It pushes the envelope of its craft visually and narratively, while allowing gamers who can’t handle the intensity of  Call of Duty: Modern Warfare 2 to experience the best their console has to offer,” Crook adds.

Unlike previous adventure games, though, “Heavy Rain” resonates more with mature audiences, thanks to situations that are close to home. In addition to babysitting, players are asked to help their kids do homework, set the dinner table, and care for a suicidal mother.

“Gameplay is no longer a challenge for the player; it becomes an element of the immersion,” explains Cage. And the effect works. Seemingly mundane tasks pulls the player in.

But the novelty of feeding, cleaning, and managing day-to-day task would quickly grow boring. So to spice things up, “Heavy Rain” asks the player a hypothetical and dramatic question shortly into the game: How far would you go to save someone you love?

“‘I would do anything for you,’ is something we have all said before,” says Cage. “Heavy Rain questions the player on what exactly this sentence means. Are you really prepared to do anything for love?” 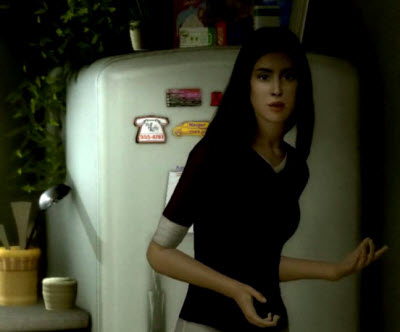 Later in the game, you’re asked by villains to cut off your thumb in exchange for information on the whereabouts of a loved one. “Should I do this?” I thought to myself, upon encountering the dilemma. “I like my thumb. Will I need it later?” Although it’s a game, it’s not an easy choice.

And that’s the point, says Cage. “The game is a safe environment in which you can answer serious questions without taking risks,” he says. As Austin Powers might say, it’s “consequence-free—yeah, baby!”

Admittedly, “Heavy Rain” effectively evokes strong emotions. But veteran players might balk at its heavy reliance on story and easy controls, something Crook recognizes. “The crux of the core game industry’s issues with ‘Heavy Rain’ appear to be that [Quantic Dream, the developer] somehow ‘cheated’ with a big story or a series of quick-time [controller] events, and because of that, it’s less of a game,” he says.

“I don’t buy this at all,” he adds. “If a game elicits emotion from players—whether that game is ‘Farmville,’ ‘Bejewelled,’ ‘World of Warcraft,’ ‘Modern Warfare’ or ‘Heavy Rain’—I don’t think it’s worth quibbling about whether the methods it used to achieve that emotional response were worthy enough.”

In short, video games are about feeling, not control. Which brings us back to what a video game can or can’t be, and why Cage is so adverse to calling his game “game.” Specifically, he doesn’t want non-gamers to overlook his work due to generalizations, because if they do, “games will be about swords, guns, and zombies for many years to come.”

Having played “Heavy Rain,” I think it’s best described as a “murder mystery adventure game.” Cage responds with “not exactly,” favoring instead the self-described “interactive thriller.” In any case, the mature themed experience is novel in its approach, and it’s obvious Cage and his team are hopeful the game can entice new players.

Will it work? As a fun game, yes, says Crook. As the next big thing? Not really. “I wouldn’t place any of my own money on the bet that ‘interactive movies’ will open up the gaming market to those not already interested.”

Whatever the case, The Diaper Combo has made it’s mark.