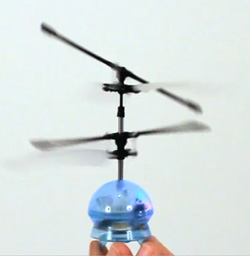 Imagine a large outdoor installation. It could be signage for a casino, large-scale artwork, or a steadily changing set of faces and images from the news.

From 100 feet away, it seems like a 3D movie still. Up close, though, the image proves to be made from hundreds of tiny flying colored LEDs, hovering midair in a three-dimensional formation.

That’s the vision of Flyfire, a project still in the bright-idea stage at the Massachusetts Institute of Technology’s Department of Urban Studies and Planning.

Each pixel in a Flyfire display will be a tiny, autonomous helicopter that figures out where in space to fly to and hover in order to serve as part of an array that creates a three-dimensional image.

Professor Carlo Ratti, an Italian architect and engineer who is now director of MIT’s Senseable City Laboratory in Cambridge, Mass., says Flyfire isn’t an attempt to build a better 3D video experience. “We do not want to compete with them,” he emailed. “At least in the forseeable future, FlyFire will be a low resolution display, not something to install in your living room. However, the fact that pixels can move and leave a colored trace in space, instead of being fixed as in a display, opens up possibilities for unprecedented effects.”

Ratti says the vision for Flyfire is to build large installation-style displays that dazzle onlookers from all sides. “You really want to look at Flyfire from a distance of 20 to 30 meters,” he said, because the flying pixels will be three to five inches apart.

Another project at MIT is working on the software that will enable Flyfire to eventually control hundreds of the micro-copters in close formation. So far it has only built and controlled “a handful” of the flying pixels. 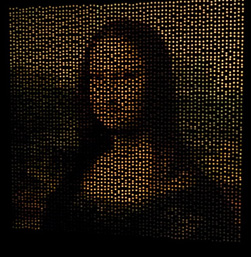 The video below shows some of the early pixel-copter prototypes, plus some computer simulations of what the full-sized Flyfire displays could look like.

That day is probably years away. But, to paraphrase science fiction novelist Neal Stephenson, part of what makes an MIT-grade scientist is the ability to plug away at a project long past the point where any normal person would have been bored to death. Hopefully the Flyfire team will post videos of their test flights as they move forward. Even the failures will be fun to watch.

(Disclosure: Paul Boutin attended MIT, a fact he often drops into conversations, just like the Harvard guy on 30 Rock.)