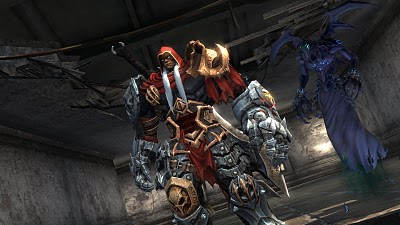 With the world of man falling to the war between heaven and hell, one mythical being is sent to pick up the pieces. So goes the story of War, one of the four horsemen of the apocalypse, who in this universe is the protagonist on our journey. Recommendation after the jump…

Initial previews for this game did not go over well with the enthusiast press, with most impressions coming off lukewarm. But after a couple hours, I felt it was pretty clear THQ was on to something with the way Darksiders builds an interesting world in which the user is tested in both dexterity and creativity. Difficult to not mention its obvious homage to such hit franchises like Zelda, Devil May Cry and even Portal; Darksiders balances numerous game play mechanics across a 12 hour story arc and numerous dungeons. Your guide, a wise-cracking Mark Hamill, provides advice as you traverse these locales, slaying demons and angels alike. 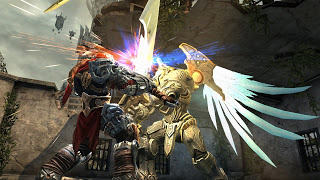 Combat is similar to most third person action titles, making use of a few weapon types and their various moves. Weapons may also be augmented to have different effects, and melee weapons also have a leveling system. One thing Vigil, the developer, may want to consider in future installments, weapon balance. Your sword being mapped to a face button and other weapons sharing a second face button caused me to use the alternate melee attacks less than I probably should have. The sword is just far too effective to bother with the other options. Weapons also play a part in puzzle solving, using a large shuriken to light objects on fire, or activate distant buttons, it certainly has that nostalgic feel. Throw in various blocking moving; switch flipping and environment traversal and you have a full fledged puzzle adventure. There were moments when I scratched my head until the light-bulb flickered on, but overall I found the puzzles had just the right amount of learning curve. To touch on combat just a bit more, there is also a magic system which can be upgraded. This utilizes "wrath" (mana) and there are four main spells which are upgrade-able. The wrath, like your health is also expandable through collectibles. The game contains lots of collectibles actually, including the wrath and life cores, you also have artifacts, abyssal armor pieces, and souls, which are in game currency. Managed through an inventory system and store front, it seemed that augmenting weapons (to get more souls) would be the only way to get everything. And even then, trying to upgrade everything in my character and the number of souls I needed to do so, seemed insurmountable. Though I did play the game on casual for time reasons, which this would decrease the enemy count (decreasing souls awarded). 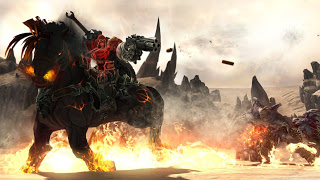 As you go from dungeon to dungeon, fighting bosses and collecting anything in sight, the story will take you through an interesting spin on some of these characters of myth. Despite a rather annoying turn of events before the end, I found the story and art direction a good fit for the feel of the game. Your horse being one of my favorite, Ruin is summoned straight from the ground, instead of through a silly whistle. Providing you for some cool actions moments, where War can leap off a cliff and summon Ruin mid-air, where he will cushion your fall and most times be running towards the destination. Overall, I was happy to have a game scratch that itch, while Nintendo contemplates how to bring Zelda into the next generation. THQ already stated in an earnings call, that we can expect to see a Darksiders 2 and I will be happy to play it. Therefore, you should go PLAY IT NOW!
*note images courtesy of Darksiders Community Site