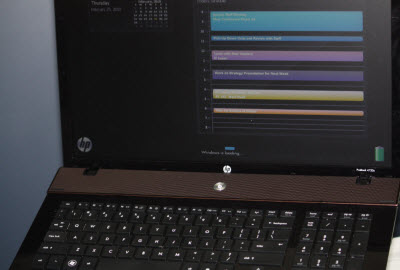 Hewlett-Packard‘s newest business laptops come with a cool application that shows your daily calendar within five seconds, even before Windows boots.

All you do is start the computer and then press the F4 key. The screen will show your calendar items for the day in multiple colors. You can also see your laptop’s remaining battery life. The application is aimed at people who are in a rush in the morning and need to find out within seconds where they have to go.

The software comes on all new HP ProBooks and EliteBook P series laptops for businesspeople. HP is launching a bunch of these new laptops today. The application works alongside other HP QuickWeb and QuickLook software that lets you check out your email or visit a web site before Windows boots.

Among the new models are four new versions of the HP ProBook Standard Series business laptops. These versions range from the HP ProBook 4320 with a 13.3 inch screen for $719 to the HP ProBook 4720 with a 17.3-inch screen that sells for at least $925. They carry Intel Core i3, i5, and i7 processors that debuted in January, and they include options such as Intel HD graphics or ATI Mobility Radeon graphics chips. They have a durable brushed-aluminum finish and come in caviar (black) or bordeaux (red wine color).

The Standard series laptops come with business-class security, including a webcam that can recognize your face and log you into your account. The laptops are bundled with Arcsoft Total Media software suite for applications such as DVD playback. Battery life ranges from five hours to 10 hours, depending on whether you have the  6-cell or the 9-cell battery. The latter costs extra. The new laptops will be available later in March.

HP is also launching a new generation of its high-end business notebooks, the HP EliteBook laptops. These computers meet durability standards set by the military and come with metal hinges with steel pin axels and a reinforced display latch. The models have spill-resistant keyboards that drain spilled liquid through the bottom of the laptop. 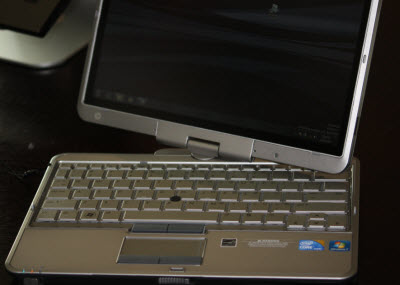 The HP EliteBook 2740p laptop has a touchscreen and can be converted into a tablet by twisting the screen on its swivel and laying it flat over the keyboard. It has a 12.1-inch LED display, runs for 5 hours on a six-cell battery or 11 hours when attached to an optional ultraslim battery. It will be available in April starting at $1,599. An optional $299 docking station provides a DVD drive as well as a variety of connectors such as DisplayPort and hard drive attachments. The docking station is available April 12.

The 3.3-pound HP EliteBook 2540p has fewer bells and whistles and sells for $1,099. Its battery life ranges from four hours on a 3-cell battery to eight hours on a six-cell and 10.5 hours on a 9-cell battery. It will be available in April.