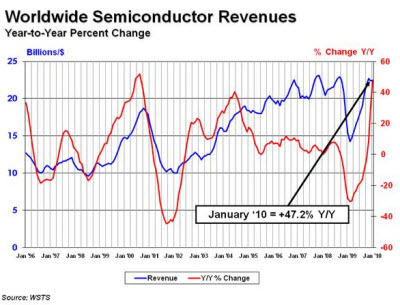 January sales of semiconductors were up 47.2 percent from a year ago and 0.3 percent from December, according to the chip industry’s trade group. That’s encouraging, since chips are a staple in everything electronic.

Total worldwide sales were $22.5 billion, up from $22.4 billion in December and $15.3 billion a year ago, according to the Semiconductor Industry Association. That increase from December is unusual because, on a seasonal basis, chip sales usually fall in January after a big holiday-driven inventory build-up in December.

The monthly sales numbers represent a three-month moving average. The improvement reflects the better business environment for the industry and is a sharp contrast to the doldrums of the deep recession a year ago, said George Scalise, president of the SIA. Strong categories include PCs, cell phones, cars, and industrial applications.

“If the current trends continue, there is upside potential for 2010 growth above our November forecast of $242.1 billion, but a growing global economy driven by consumer purchasing will be key to sustaining these trends,” Scalise said.

Asia-Pacific grew at a rapid 69.2 percent compared to a year ago, while the Americas were up 42.2, Europe was up 29.5 percent and Japan was up just 9.1 percent.