Social network hi5 continued its mad rush to create an attractive social gaming platform by making its own network compatible with games made for Facebook.

In developer parlance, that means hi5 is supporting Facebook-compatible application programming interfaces, or APIs. Previously, hi5 was only supporting Open Social. But it found that developers were not only making their social games for Facebook, they were jumping through hoops just to keep up with the social network’s evolution. They didn’t have time to port, or adapt, the games to a secondary platform. 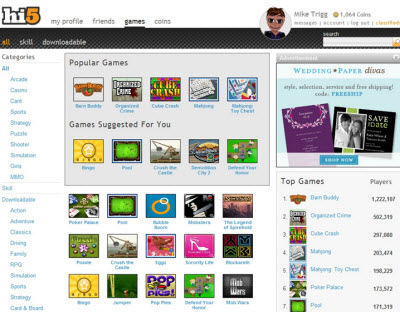 Now, with the new APIs, developers will be able to create a game that can run on both Hi5 and Facebook. That makes it easier for developers to support hi5, said Alex St. John, president and chief technology officer at the San Francisco-based company. What developer would turn down a chance to get their games in front of 50 million more monthly active users without any extra effort, he asks.

“I don’t want to be in line after Facebook to get great games,” he said in an interview. “It’s a business decision, and we want to make it easy for developers.”

hi5 already has lots of games. But none of them are as big as FarmVille, the marquee game on Facebook with more than 80 million monthly active users. This new effort isn’t about getting Facebook’s top 20 games to move over to hi5. Those games and their companies are often tightly aligned with Facebook. Rather, St. John said he is targeting the companies that are coming out with the newest games. They are more likely to accommodate the shift to a dual platform, and could be the source of future hits.

Right now, a few select partners are trying out hi5’s Facebook-compatible interfaces. They support functions that social games need most, such as the authentication of users, profile pictures, friends, updates, and photos. These are the Facebook platform features that are most commonly used by game developers. But hi5 will consider adding or emulating other features over time.

The new APIs also support the JavaScript interfaces necessary to enable users to invite friends to a game. Among those trying these interfaces out is Matt Wilson, founder of Detonator Games. He said his company launched a Facebook game on hi5 with very little modification. hi5 will continue to support Open Social, which has enabled developers to launch thousands of social apps on the network. The newest hi5 games using the new platform will launch in early April with select partners.

St. John will be a speaker at GamesBeat@GDC, where he promises he will be revealing more details about the company’s game developer program.