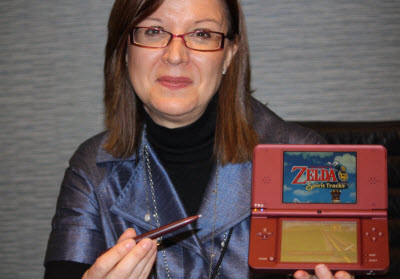 Apple has seen phenomenal growth in sales of its iPhone and iPod Touch devices, and the No. 1 activity for those devices is gaming. But Cammie Dunaway, executive vice president of sales and marketing at Nintendo of America, said in an interview that her company isn’t worried about the competitive pressure from iPhone games that cost 99 cents in comparison to $30 games on the Nintendo DS and DSi.

DS and DSi sales are still going strong, and Nintendo is introducing a new version of its handheld, dubbed the DSi XL, on March 28. The screen for the device is 93 percent bigger, and you can see the screen from the side better than on the older models. You can read electronic books on the DSi XL and play goofy games with its dual cameras. Is this enough to go up against the iPad? It will certainly cost less at $189, compared to $499 for Apple’s upcoming device. Nintendo is the most profitable company in the traditional game industry, but if the recent future says anything, it’s that traditions can change.

Here’s the transcript of our conversation with Dunaway. 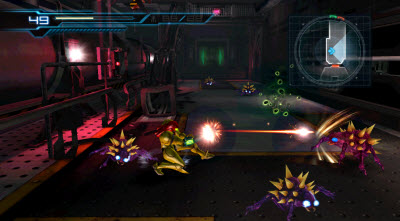 VB: You showed off Metroid Other M today for the first time. The graphics didn’t live up to what I’ve seen on the Xbox 360 and PlayStation 3 games. What will be the appeal of this game?

CD: Well, you can’t get access to Samus and the Metroid franchise on the other platforms. And this experience isn’t about the graphics at all. It is a shooting game. But it is a much more emotional experience with story to it.

VB: It looks like you have a great line-up for the first half of 2010. I wonder if the line-ups for all the console companies look so good now that it will become easier to beat the revenue numbers from last year. Do you think that will happen? 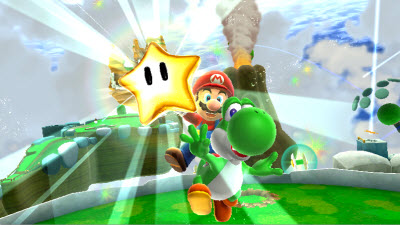 CD: We certainly agree that we have a great line-up of games — and games that appeal to all types of audiences, from Super Mario Galaxy 2, to Metroid Other M, to FlingSmash on the Wii. Great software  sells hardware. We see that time and again. We have the kind of products that will allow us to have strong momentum this year. The pacing of the software releases is different than it was last year. That will benefit us and the retailers.

CD: Certainly on the Wii, 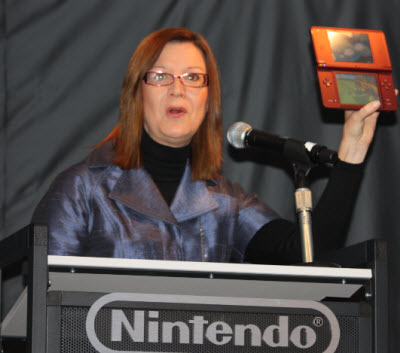 we are now in the fifth year. We have had extraordinary success. We think we can continue to sell many more Wiis. If you compare our U.S. installed base of 28 million, it is pacing at about 5 million more than the PlayStation 2 was at this point in its life cycle. The PS 2 went on to sell more than 50 million. So that means there is plenty of opportunity to sell more Wiis. That being said, going into the fifth year, you usually don’t anticipate selling more than you did in the previous year. What we are excited about is being able to capitalize on this great installed base and bring out great software.

VB: Some of the chatter last year from game startups was that the cool free-to-play games with virtual goods models were eating away at the core base of consoles and that was why sales fell. If the core business grows again, then it seems they may be wrong. They almost gloated about the growth on Facebook, iPhone and the free web games. How do you look at whether that is cannibalizing the core console game business? 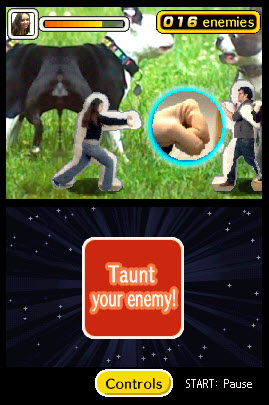 CD: With the record-setting performance we had in December, we didn’t see cannibalization in our business. We do think there is a great role for digital content, and that’s why we are so committed to WiiWare and DSiWare. One thing it does that is important is expose consumers to innovative titles that would never make it onto a retail shelf. By doing so, it can help expand the category. A great example is Photo Dojo which we are showing off today. Every single person that comes across it smiles and laughs and wants to try it. It’s a product that you probably wouldn’t see in packaged retail software, but it makes perfect sense as a downloadable DSi game.

VB: If Facebook gets really popular, wouldn’t it be a good idea to put Mario on it?

CD: (Laughs). I don’t know. I think we will continue to save Mario for our own platforms. It’s one of the secret weapons we have. Mario and Zelda are intellectual property that is important to us and will only be seen on Nintendo platforms.

VB: Do you have the benefit of launching games that might have shipped last year but are really going to get out the door this year?

CD: We don’t release a game because there is a hole in the calendar. We release games when they are perfected and ready to go. We really like being able to have a steady pace and are blessed this year to have a good line-up. But we ship when the products are ready. 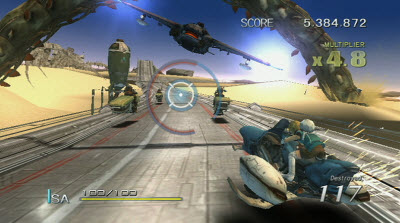 VB: How do you categorize the games that are coming this year?

CD: There is a real breadth of appeal to the games coming this year. On the Wii, 43 percent of the primary gamers are female. People who have come in through products like Wii Fit Plus are now playing the New Super Mario Bros. A product like Super Mario Galaxy 2 is great to keep those new female gamers engaged. But we also want to make sure we keep all of the Nintendo loyalists really excited. Products like Other M and Sin & Punishment, and games from our third-party partners like Monster Hunter Tri from Capcom, are going to address them. I see a strong balance. The same applies on the portable side. It starts with a bang on March 14 with Pokemon. It comes packed with a Pokewalker [a wireless device that contains a pedometer]. This is the first time you are able to take the Pokemon out into the environment with you. Think of all of the fights that have happened between parents and kids about playing their games. Now the kids can put their Pokewalker in and start leveling up while they are not playing. Then, on March 28, we launch the DSi XL. We have America’s Test Kitchen coming out as an expanded audience title. We also have Wario DIY, which enables players to create their own games and will be very appealing to the active gamer. We have balanced line-ups on both.

VB: What is the thinking behind the DSi XL? How often should you update your hardware? And are you in competition with Apple?

CD: For many years, we have been innovating with new colors. For a long time, we focused on things getting smaller and sleeker. I think it’s a fresh idea to innovate based on a larger size. The DSi XL has a 93-percent bigger screen. When people try it, they say, wow, that looks great. That will help us keep the DS business vibrant. It’s a choice. It’s not replacing the DS Lite. It’s really going to be another opportunity to find what is right for them. If they want to play only games, the DS fits. If they want to access cameras, photo editing, DSiWare digital content, the DSi is for them. And now the DSi XL gives them the choice of a larger size.

This kind of constant freshening of the hardware enables us to keep setting records. As for Apple, it is interesting that for all of the talk of competition from Apple last year, here in the U.S. we had our best year ever, selling 11.2 million units. That has never been done by any game platform ever. Consumers are still finding fun with our products, and there is a lot of room to grow. If you look at the penetration of the market, the DS franchise here in the U.S. has a long way to go. In Japan, one in two consumers has a DS. Here, it is one in four. So we have room to grow. 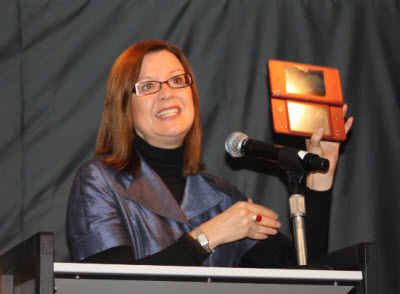 VB: The Nintendo parent company has predicted worldwide that sales will be flat for the DS franchise in the year that ends March 31. Why is that?

CD: It differs by region. The market expansion for DS happened much sooner in Japan and Europe than it did in the U.S. So the experience in the U.S. is different from the rest of the world now. The DSi XL has been extremely well received in Japan, and it looks like it is really capturing the imagination there.

VB: Sony and Microsoft have signaled they have big things coming for the fall. Sony has the Arc wand-like controller, and Microsoft has Project Natal. You haven’t yet signaled what is coming. Are you saving it for E3?

CD: We have enough to talk about. We have got such a strong line-up for the first half of the year. People are going to have to tune into E3. As [Nintendo chief executive Satoru] Iwata has already indicated, there are some things we can count on for E3: the new Zelda and the Vitality Sensor. We hope to have a good show.

VB: You have the Vitality Sensor coming. Are there still ways to breathe life into five-year-old hardware and accessorize it?

CD: I think that consumers respond to great experiences. Peripherals can certainly do that. Look at the success of Mario Kart. It’s a heck of a lot of fun to put your hands on that steering wheel. Or the success of Wii Fit Plus and the Wii Balance Board. We are at almost 11 million units in the U.S. Absolutely, peripherals that bring the right experience, and are combined with the right software, can be hardware drivers.

VB: Some analysts are predicting hardware price cuts again this year, on top of the $50 to $100 price cuts that happened last year. Maybe that’s true for the other guys more than you?

CD: Yes. Right now, we continue to see demand at very strong levels. It’s tough to find a Wii now. If we hit 100 stores in the area, we would find Wiis in only 20 percent of them today. That tremendous strength we had in December really wiped the pipeline clean. Our pipeline, the retailer pipeline. And so with that kind of demand, it doesn’t suggest the need for any pricing actions.

VB: I saw that Wal-Mart was really aggressive with pricing in the holidays. Are software prices going down?

CD: I don’t know about software prices for the whole category. But for us, our philosophy is to price the software at the right price when it goes out to the market. That varies by title. We launched Endless Ocean at $29.99 because that is the right price for that piece of software. Our 100 Classic Books for the DS is priced at $19.99.

Please check out our GamesBeat@GDC executive game conference at the Game Developers Conference on March 10.