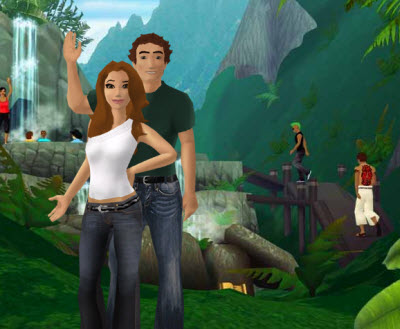 There’s no there anymore. There.com, an ambitious virtual world that ran for almost seven years, plans to shut down on March 9.

Michael Wilson, chief executive of Makena Technologies, said in a post that the company was hard hit by the recession. Membership continued to grow, but revenue decreased. Meanwhile, users migrated to social networks such as Facebook in droves. There.com tried to crank out new features and revisions.

There.com went through two iterations. Its first effort fizzled and then Makena took over the company. It opened its doors to millions of visitors over the years who built virtual characters, or avatars, to engage in a tourist-travel fantasy world with clubs, card games, quests, virtual commerce and chat. I wrote many stories about the company and the activities in it such as paintball, buggies and flying hoverboards.

There allowed its users to create their own clothes, vehicles, accessories, buildings, lawn furniture and other things. It also attracted big advertisers into the world, including Coca-Cola, CosmoGirl, Bebe, K-SWISS, and SPIN.

“We believe that all of this together made a world which was, well, like “real life”, with just the right level of unreality thrown in,” Wilson wrote.

The company said any purchases of its virtual currency, Therebucks, after Feb. 1 will be refunded in full. This doesn’t bode well for other virtual worlds such as Second Life. Another virtual world network, Metaplace, also shut down at the beginning of the year.

The original There.com was founded in 1998. It raised about $35 million, mostly from individuals, before a recapitalization in 2004. The company’s existing shareholders provided $9 million after the recapitalization. Forterra spun out of There, while Laguna Beach, Calif.-based Makena Technologies focused on its own consumer-oriented virtual world, There.com. Makena also ran virtual worlds for MTV such as Virtual The Hills.