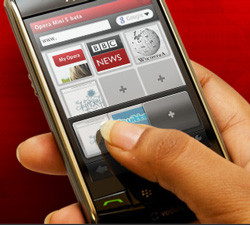 Opera Mini is a popular browser among owners of what the mobile industry calls feature phones — the models that aren’t powerful smartphones. Oslo, Norway-based Opera claims 50 million users worldwide for the browser, which uses data compression techniques to reduce the size of Web page downloads. Compressing the data saves both download time and data plan costs.

Today, the company announced a custom Windows version of Opera Mini that runs “native” on Windows phones. That means instead of using the phone’s Java engine atop the Windows Mobile operating system, the program has been compiled to run directly on Windows as a standalone application, just like Microsoft’s mobile version of Internet Explorer.

The benefits are dual: The native version is faster, and it has familiar Windows UI controls rather than device-independent Java buttons and menus.

Opera also developed a version of its browser for the iPhone, but it’s probably not actually going to be available on the popular device anytime soon.