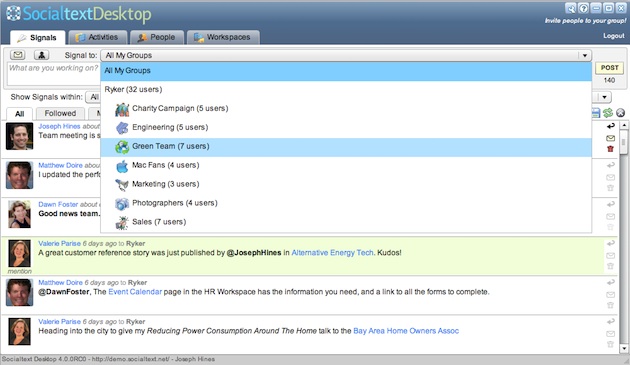 Socialtext, a startup that offers a variety of collaborative tools to businesses such as wikis, company social networks, and Twitter-style microblogging, launched version 4.0 of its platform today. There are several new features, a number of them revolving around helping users find what’s useful in all the activity and chatter of a big organization.

For one thing, users can now create collaborative groups, where an individual team gets a workspace, which can be public or private. These groups can use any of the tools available in Socialtext, and they be used as either a permanent, longstanding team, or created on-the-fly, around a specific project or assignment. As one example of where these groups features might be useful, co-founder and President Ross Mayfield pointed to a team responsible for handling internal corporate communication. That’s a team that needs to have a lot of internal discussion before it came present its message to the company as a whole, and it could use a private Socialtext Group to do that.

Within Socialtext’s microblogging side, you can now divide posts into different channels, presumably reflecting different topics and teams. One thing that seems particularly useful is the ability to choose which of your own posts go to which channel, compared to groups on Twitter, where all of your posts show up regardless of topic. Socialtext is also adding the ability to search the microblogging feed, and to “flashback” through a conversation, so that you’re not just seeing a post stripped of context, but also the previous post that someone was responding to.

A final new feature allows you to see whether someone is actually logged into Socialtext in a given moment, so you can reach out and have a real-time conversation with them if needed.

The Socialtext 4.0 launch was also my first chance to talk to Christopher Lynch, who now manages the company’s marketing. Lynch used to be a writer at CIO magazine, so I asked for his perspective on how Socialtext stands out from competitors like Yammer, PBworks, and many others.

“There’s a lot of players, and it feels like there’s a new vendor cropping up every day,” Lynch said. “What makes Socialtext unique is that it’s taking social software and applying it to core businesses processes so that people actually get work done.”

Mayfield added that where many companies offer tools that exist “above the flow” of employees’ everyday work, Socialtext provides tools “within the flow.

The Palo Alto, Calif. company says it has 6,500 customers. Its investors include Draper Fisher Jurvetson, SAP, and Omidyar Network.