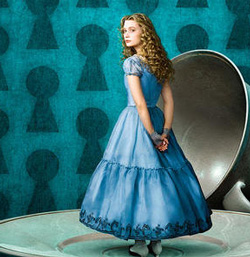 According to Jaffe, about three-quarters of Alice was shot with 2D cameras, then converted to 3D. “If you go looking for the conversion,” he said, “you’re never going to be able to tell the difference.”

Why shoot a 3D movie in 2D? Because it lets an experienced filmmaker like Burton use the tools he’s familiar with, rather than abandoning them for a whole new way of shooting scenes as James Cameron did for Avatar. Jaffe says that to Hollywood filmmakers, 3D is like Technicolor and steadycams. It gives them new ways to tell a story and to capture an audience’s attention. In fact, Legend originally specialized in all-digital colorization and restoration of classic films before making the leap to 3D.

Legend has movie work booked through 2012. But the company is also talking to TV and movie studios about converting their back catalogs to 3D to take advantage of what industry analysts say is a coming boom in 3D television sets in homes. Electronics market analysts iSuppli have forecast that 78 million 3D sets will be bought in 2015.

Obvious geek blockbusters The Matrix, Star Wars and Lord of the Rings are among the movies expected to be retrofitted to 3D, a process that takes Legend about four months.

San Diego-based Legend 3D was founded in 2001 as Legend Films and is privately funded. With additional offices in Los Angeles and Panta, India, the company has about 750 employees total.