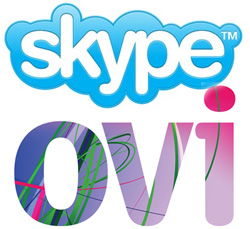 Update: A Skype representative has told VentureBeat that Skype chose to keep its app out of the U.S. Ovi store because of a pre-existing deal with Verizon. You can download Skype for Nokia Symbian phones by opening skype.com/m from your phone browser.

The release, still on Skype’s website, included an enthusiastic quote from the general manager of the U.S. division of the Symbian Foundation, which guides the operating system’s development.

Yet the Skype app never showed up in Nokia’s U.S. Ovi store. A search for Skype finds the IM+ for Skype client, which doesn’t make voice calls. It also matches Fring and Nimbuzz, which do make calls.

A Nokia spokeswoman told me that Nokia had definitely been under the impression Skype would be there, but that Skype had no-showed. (Ovi’s app store works differently from Apple’s. Instead of the company approving apps, Ovi lets publishers put the apps into the store themselves.)

A Nokia spokesperson said yesterday that he would get back to me with the details on why Skype had changed their minds. An entire business day later, Luxembourg-based Skype, in which eBay has a 30% stake, has not responded.

You can download and use Skype in America directly from Skype’s website. But the whole idea of Ovi is to put all the hot apps in one place, rather than requiring Nokia users to hunt the Internet from their cellphones for this app and that one.

As of today, Nokia claims Skype for Symbian is available through Nokia in 175 countries. The main exceptions are China, where Skype is working with Chinese language portal TOM Online to distribute the app in the near future, and the USA, where Skype just isn’t there.

Obviously, something went wrong. Someone changed their mind. But who and why?