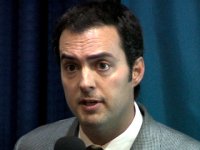 Jon Fisher is a serial entrepreneur and investor who credits timing as a big part of his success. Fisher said he keeps a close eye on economic cycles, so he can start his companies right after things hit bottom, build them up over the next few years, then sell before the next downturn — for example, he sold his security company Bharosa to Oracle back in 2007.

Now, using a methodology he has developed for predicting unemployment numbers, Fisher said he’s gearing up to start his next company. Unemployment numbers are about to drop, the economy is about to pick up, and entrepreneurs need to get going if they want to ride the next wave, he said — otherwise they won’t be acquisition-ready before the next crash. In fact, Fisher said the best time to start a company was probably last year, when things bottomed out. (That was also when Fisher invested in Linksify, a contact management startup founded by his chief financial officer at Bharosa.)

“I think right now as the wave is forming, or I should say stabilizing, it’s an excellent time to be starting a company,” he said. “But if you don’t see an exit by 2011 or 2012, you need to prepare yourself for God knows what.”

Okay, so the idea of a lone entrepreneur making grand economic predictions may sound a little dodgy, but Fisher is also on the faculty at the University of San Francisco and developed his predictions (which are based on the number of new housing starts) there. More importantly, he has been impressively accurate over the past few years, starting with a prediction that the country would hit 9 percent unemployment in April 2009. When I spoke to Fisher last night, he said the unemployment numbers announced this morning would hover at around 9.7 or 9.8 percent. That’s exactly what they did, even though the federal government found those numbers to be better than expected.

Besides spurring Fisher to look for his next company, the numbers have given him a message for government policymakers.

“The policy response really needs to change,” he said. “Right now they want to continue printing money for fear that unemployment’s going to be static or increase.”