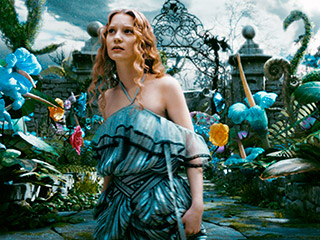 You could write off the 3D blockbuster movie Avatar as a fluke. You could even call U2 3D a flop. But Disney’s three-dimensional movie Alice in Wonderland is breaking all previous box office records for March.

Entertainment Weekly’s Hollwood Insider blog reports that Alice launched like a rocket on Friday, beating the opening-night record revenue raked in three years ago by 300, another movie that pushed the boundaries of computer-assisted filmmaking.

Avatar, EW adds, is finally falling off with a declining revenue curve akin to a regular film. But that’s after the most expensive movie ever made became the all-time box 0ffice champ, packing theaters for 12 weeks and beating producer James Cameron’s previous super-success, Titanic.

In the San Francisco Bay Area, Alice is playing on the Drink Me-sized IMAX screen at the AMC Bay Street 16 theater in Emeryille, and in Disney Digital 3D on regular-sized screens everywhere.

If you go, watch the tea party scene closely. As reported on VentureBeat, it was filmed with standard 2D cameras and then converted to 3D by SoCal digital post-production house Legend 3D.