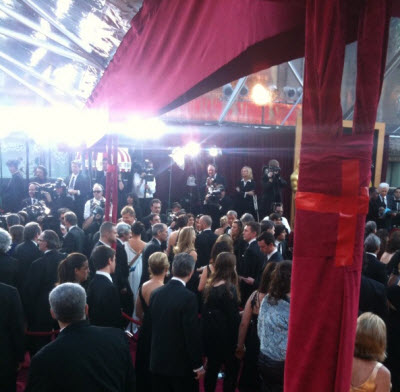 Apple chief executive Steve Jobs attended the Oscars tonight and his company ran a commercial during the show that touted the iPad for the first time.

Jobs was spotted (next to the woman in the white dress in the photo) walking the red carpet and he took a photo with a guest who promptly posted it.

During the Grammy’s Apple got comedian Stephen Colbert to show off an iPad, the tablet computer that ships for the first time on April 3, live on stage. But this time, to get in front of an audience of tens of millions, Apple presumably shelled out some megabucks. The big spend here probably means that Apple is quite serious about getting the iPad in front of mass market audiences. It isn’t just targeting geeks.

During the Academy Awards, Apple’s commercial touted all of the cool things you can do with an iPad, though with hyper-accelerated timing. You have to hand it to Jobs. He was smart enough to bankroll Pixar, sell it to Disney, and then keep the team churning out movies like Oscar-winner Up — all so that he can get an invitation to walk the red carpet and get into the biggest show on earth. Take that Bill Gates and Paul Otellini.