When I wrote about video game franchises that I never played before, I didn’t mention God of War because I never thought it was a big deal. 2010 seems to have gone out of its way to prove me wrong, as the year so far has been dominated by God of War clones and the hype surrounding part 3 is reaching a fever pitch. Last night I finally put in my copy of God of War Collection to see what all the fuss is about. 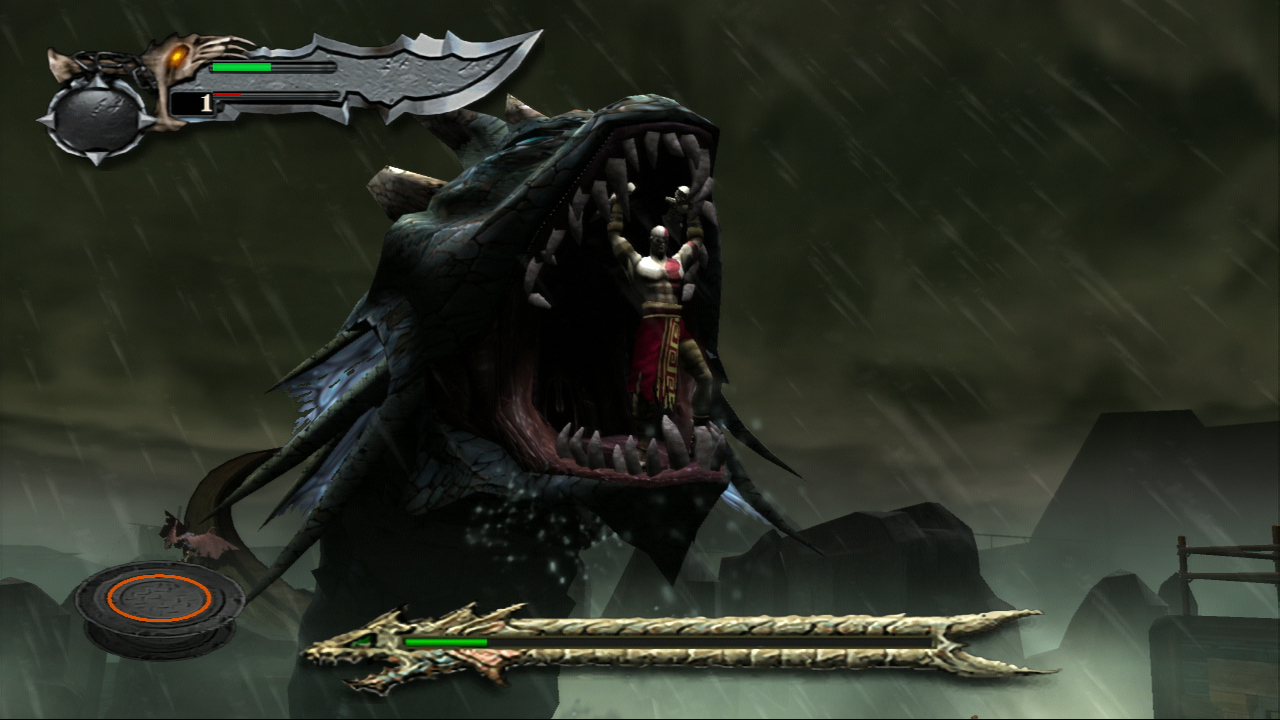 As an “older” game, there are a lot of things about God of War that disoriented me. The graphics vary in quality from adequate to awkward as the action is peppered with pre-rendered cut scenes and the transitions are pretty jarring. One minute I’m scaling a cargo net in high-definition, the next I’m watching what looks like a YouTube video stretched to fit a widescreen television.

Of greater concern is the camera and its complete autonomy. I’m used to playing 3D games where I control the view with the right analog stick. God of War doesn’t allow that, instead mapping the right stick to dodge attacks. As natural as that evasion ability feels in combat, the loss of camera control is a real slap to the face. Whenever I found myself swinging my weapons at unseen enemies off-screen, I wanted to adjust the view to see what I was fighting.

I don’t think I’d mind the lack of control as much if the camera weren’t so fidgety. When facing the Hydra at the end of the first level atop a tiny crow’s nest, the view kept shifting slightly as I moved. This unwanted, unnecessary motion caused me to fall more than anything the Hydra did.

The Hydra battle itself was as impressive as it was irritating. In between attacks, the Hydra roars which deals no damage but it pushes you off the platform. You have no choice but to cling to the net and wait for its jaws to shut. This is time that just feels wasted, dragging the encounter out three times longer than it needed to be. Yet I cannot deny that when it came time to slay the beast by impaling it on a broken mast, it was exhilarating. Marching into its throat to retrieve a key was a twisted bonus, a reward I never thought I’d want but was happy to receive.

The biggest adjustment I’ve had to face is getting used to mashing buttons, and by mashing I mean “rapidly pressing as if my life depended on it.” God of War is an exhausting game to play; combat is all about drilling the attack buttons to mow down enemies with periodic “mini-games” that are quick-time endurance tests. Tap R2 to lift heavy doors. Tap Circle to force the Hydra’s jaws open. During that final battle I exerted so much bodily force while tapping that I pushed my couch back.

I get why they did things this way, of course. As tedious as all this tapping is, it’s giving me a physical connection to the action on screen more than any game I’ve ever played before. I put more effort into killing that final Hydra head than I did shooting all those thousands of enemies in Borderlands combined. When I put down God of War for the night I was beyond ready to get some sleep. I hope this series never integrates any motion controls or I might sprain something.

I’ll be honest: I’m not sure I’ll make it all the way through this game. If the first stage left me broken and begging to crawl into bed, I shudder to think what lies ahead. Still, my interest is definitely piqued, because when this game works, it offers a sense of fulfillment (emotional and physical) that few others can match.

Daniel Feit was born in New York but now lives in Japan. Follow him on Twitter @feitclub or visit his blog, feitclub.com