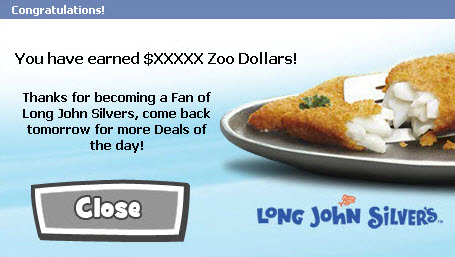 As Facebook has moved away from letting app developers spam users in their apps, RockYou has had to adjust its business away from purely viral apps such as hugs or gifts. And one of its great new schemes to keep Facebook users engaged in its apps is the Deal of the Day.

This promotion is a special offer embedded inside a social game that lets users engage with a brand advertisement in exchange for moving forward in the game. Users can opt to watch a video of an upcoming movie trailer or maybe play a game that earns them a coupon.

Redwood City, Calif.-based RockYou has tested the Deal of the Day as a new way to make money from social games, which often rely on virtual goods business models. Those games are free to play, but users can choose to buy virtual goods with real money to make their game experience better. 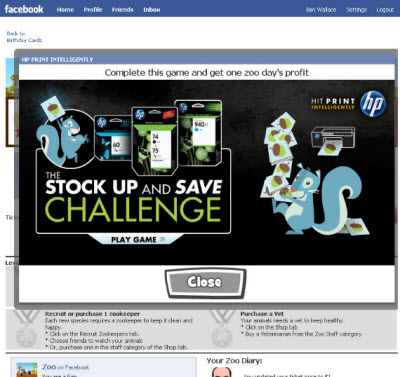 The problem on Facebook is that a small percentage of gamers actually spend money. The others may view banner ads, but those kinds of ads don’t generate much money relative to the virtual goods revenue. It is a lopsided revenue picture, said Lisa Marino, chief revenue officer of RockYou, in an interview.

With the Deal of the Day, RockYou can add “cost per engagement” to its revenue stream. Advertisers pay only if users complete an action, like getting users to take a poll or a quiz, join a fan page, or become a Twitter follower of a brand. By highlighting the promotion as a high-profile Deal of the Day, RockYou can get the promo in front of 280 million people across social networks such as Facebook and MySpace. The great thing is that 50 percent of those are view a deal will complete the action requested in order to progress through their game.

“We change the whole engagement picture for RockYou to a cost per engagement basis,” Marino said.

RockYou had to make a move in this direction because Facebook has instituted changes in its platform, putting less emphasis on purely viral activities like sending gifts to someone and putting more emphasis on deeper activities such as games.

It’s good for the game publishers because it means the users will keep on moving through the game, since they have earned a reward in it. And instead of monetizing just 3 percent to 5 percent of all users, now the publisher can monetize as much as 25 percent. In raw numbers, several hundred thousand users are clicking through each day on a Deal of the Day.

The promotion deals with three major issues. Users want to advance in a game but don’t want to pay for it. A Q Interactive survey showed that 97 percent of female social gamers would rather earn virtual currency through rewards or by accepting an offer from a well-known brand, rather than using their own money.

Brands can also now fish where the fish are. Social network fans are often resistant to ads. But inside a game experience, they’re totally engaged and more receptive to offers that are relevant inside a game and seem like they are part of the game. The users can also trust the offer as authentic, which is why the completion rate is so high.

For the past three months, RockYou has tested the Deal of the Day across a number of games with advertisers such as Sony Pictures or Hewlett-Packard. The company started by testing ads inside its Zoo World app on Facebook. The participating brands include brand advertisers in cars, consumer products, food and beverage, and media and entertainment.

Since RockYou can guarantee a high level of engagement, it can charge more for the special offers. The cost per action ranges from 15 cents to $1. The latter is reserved for more engaging experiences, like creating a Flash mini game within a game that results in the user downloading a coupon.

By the end of the year, Marino expects to do about 40 to 50 major campaigns. Rivals can do the same kind of promo using offer providers such as Offerpal or Super Rewards. But those promos appears as an iFrame, or separated into separate segments in a web page. RockYou can insert the promos into the game itself. If it turns into an advantage, it will be a temporary one. If it’s successful, others will copy it.