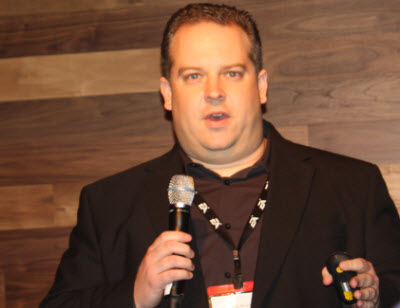 Electronic Arts said today that it has learned some revealing information by closely studying the habits of its video game customers. In fact, the company is mining so much data in its hardcore football games, it reminds me of the playbook of social game startups like Zynga, which constantly revise based on customer preferences.

At its party after the Game Developers Conference today, EA Sports executives said that user research is helping to refine the way the company makes its games. The big advantage is that about 76 percent of the 6 million buyers of the NFL Madden 10 football game are playing online, compared to only 36 percent in 2006. About 82 percent of the NCAA Football fans are playing online. The online connection allows EA to collect tons of data about the collective game play patterns among the fans.

That gives EA cool data. In the past year, for instance, after the Steelers won the Super Bowl, there was a wave of loyalty changes across the country as players switched to playing the Steelers. The data also shows that the star quarterback Brett Favre has thrown 7,564,382 interceptions in Madden games to date since the company began collecting data in 2004. Now there are more than 173 million data updates per day.

The data helps the game designers make decisions. One feature in the game allowed players to do something cool, but it worked only 23 percent of the time. That meant it was too hard. Another feature, the hit stick, lets a player try to hit a rival hard to knock to the ball out of the other player’s hands. It works about 46 percent of the time, with 518.9 million attempts succeeding out of 1.135 billion tries.

EA also found that game had gotten far too complex, said Jeremey Strauser. Of 330 plays for every team, the average player of the game used about 13 plays. The average game is also too long at 63 minutes. And the worst thing about that is the actual game action time in those games is about 17 minutes. The rest of the time is spent picking plays or maneuvering the user interface. So the new theme for Madden 11 this year is “simpler, quicker, and deeper,” Strauser said.