Hardly a week goes by where we don’t receive a company pitch from a hopeful startup trying to crash the group deals scene. And it’s for good reason, since venture capital firms seem happy to throw cash at well-executed takes on the business model.

LivingSocial is the latest to score a large amount of funding. It raised $25 million in a round led by U.S. Venture Partners, with Grotech Ventures and Steve Case’s Revolution, LLC. That’s fresh on top of a $5 million round announced only two months ago and all of Living Social’s existing major investors made sure they got in on this round too.

How does group buying work? It’s pretty simple: Get a local business to offer a deal only if a certain number of people sign up. Send it out on Facebook and if the crowd can round up enough people, the deal is on. There are extra little incentives built in to make it more viral. If a Facebook user can recruit three others to back the deal, they get the offer for free. LivingSocial gets a cut of the business it generates for the local merchant if the deal goes through. The company also opened up additional viral channels today by launching an affiliate program — so if blogs or other sites happen to funnel extra customers through LivingSocial’s deals, they’ll get a revenue share too.

The Washington D.C.-based company will use the new funds to open up in four new markets including Chicago, Denver, Raleigh Durham and San Diego.

LivingSocial’s best-funded competitor is Groupon, which raised $30 million in December. There are scores of other companies with different takes on this business model including Cherry Deals, Brazil’s Compra3, U.K.-based Likebees, luxury-focused SocialBuy and Scoop St. There’s even a Kayak-styled search engine for group deals called Yipit. Unlike other fields we cover, many companies can probably co-exist in this space since it’s not a model that takes a lot of work to make financially sustainable and there’s probably tons of room for niche-focused competitors. (Think Groupon for moms or LivingSocial for athletes. Having an affiliate program where you can market to tightly-knit online communities around blogs will help a lot here too.)

The major risk is that one of these competitors breaks out of the pack by offering a self-serve system, where small businesses can sign up automatically to offer group discounts. Most of these companies have a ‘Deal of the Day’ model where there’s a single offer that has to be negotiated between a salesperson and a business. Finding a scalable solution that allows hundreds or thousands of deals to be run simultaneously may be the key to the big bucks. 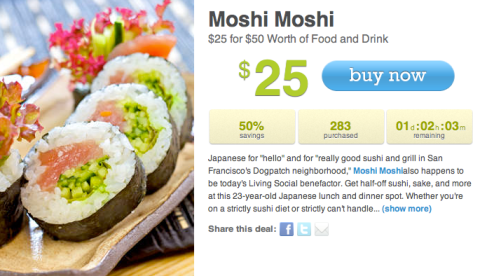