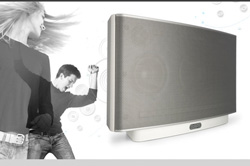 Santa-Barbara-based Sonos sells wireless multi-room home music systems. They’re kind of pricey, but they work at least as well as trying to hook all your computers together with iTunes. Plus you don’t have to stop the music to reboot your PC.

Sonos, founded in the Wi-Fi-crazy days of 2003, has survived the intervening bad years and emerged with a new round of funding: $25 million led by Index Ventures, which has added VC Mike Volpi to Sonos’ board of directors.

As AllThings D reports, Sonos plans to use the funding to expand sales into China and Japan. Sonos’ recent M5 model, designed to be run from an iPhone, is priced at $399. That’s a lot less than Sonos’ multi-thousand-dollar systems.

Sonos won’t talk about its valuation in this round, but the company has collected $65 million in funding so far, most of it from angel investors. CEO John MacFarlane told AllThingsD that only 35 percent of Sonos’ business comes from the United States. The company is pushing for growth by going broad worldwide, rather than cutting deep with pricey products.