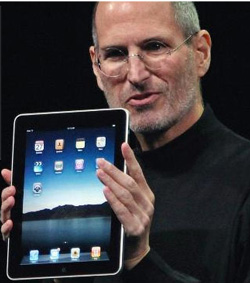 A group of stock investors who hang out at the members-only AAPL Sanity Board forum got together to guesstimate how many iPad tablet computers Apple had sold on Friday.

The group compared their own order numbers from the Apple Store, then extrapolated from the timestamps and confirmation serial numbers for 48 orders of 54 iPads. They calculate that Apple sold 120,000 of the touchscreen machines on Friday.

Apple-watching journalist Philip Elmer-DeWitt, who has tracked the company for decades, believes the numbers are close enough to his gut instincts on the iPad’s popularity that he blogged the details from the forum. Notably, two-thirds of the orders were for iPads with only Wi-Fi networking, and without 3G wireless capability.

Apple is limiting iPad pre-orders to two units each. “Six of the 48 people who reported their purchases ordered two iPads,” DeWitt wrote. “One AAPL Sanity member said she was planning to buy nine.”