Social news site Digg announced an upcoming launch of a radically overhauled site, new.digg.com, that will go public in the next few weeks. Personalized homepages and faster performance are among the site’s major changes, as Digg struggles to compete with Twitter and Facebook for the attention spans of Internet news junkies.

The new site is currently collecting email addresses of people who wish to be notified when it’s ready for user testing.

Digg CEO Jay Adelson described the site’s changes to attendees at the South by Southwest conference in Austin, Texas on Sunday. Adelson said the site has been under development for five years.

He said the new Digg would be able to handle millions of submissions per day, rather than the thousands for which the site had originally been architected. Besides normal Internet audience growth, Digg, which launched six years ago in 2004, must today deal with automated submissions made through Internet APIs. These computer-powered systems can easily submit a thousand URLs to Digg in the time it takes a human to enter just one.

A Digg employee told Mashable, “The entire company has been in overdrive for this project. My favorite new feature… it’s *blazing* fast.” 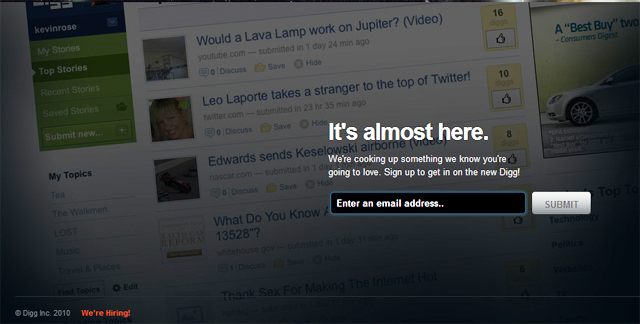