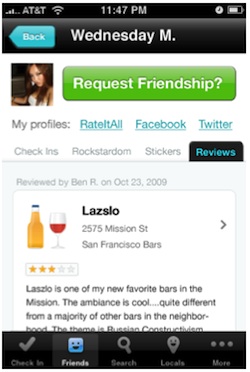 RateItAll, the review site that has described itself as a “distributed Yelp for everything,” is going mobile. But it’s not just by releasing an iPhone app of its own — RateItAll wants to help companies build their own location check-in services.

There are a number of different companies that may want to build their own customized version of Foursquare, said chief executive Lawrence Coburn. A conference might want to encourage attendees to share their location with each other. A hotel might want guests to share which attractions they’re visiting. Those companies could take the basic template created by RateItAll and customize it with their own look. For example, RateItAll has already announced built apps for soccer website Footbalistic, where users can check in wherever they’re watching a game, and with the Online Marketing Summit.

To show off what RateItAll can do, the company has released an application called DoubleDutch (App Store link). It includes location check-ins, friending, stickers rewarding different types of user activity, and integration with Facebook and Twitter. Companies can add their own logos, stickers, and venue information, and they also get a tab within the application where they can add whatever they want.

RateItAll will charge a one-time setup fee for the apps, then make revenue sharing deals for advertising.

This move may seem like a big shift for a review website, but Coburn said the apps take advantage of the company’s database, so that they’re populated with locations and reviews. That should give RateItAll an advantage against other build-your-own-location-app services like Socialight. The apps also help build that database, since there’s an option to rate and review and location when you check-in.

The San Francisco company is announcing its service at the South by Southwest Interactive conference in Austin, where tons of other location-based services are also making news. RateItAll may be the only one of the bunch that’s trying to sell its product to companies, not consumers, but I was curious if there’s still some risk that the consumer apps might take off, gobbling the audience for RateItall– if everyone’s on Foursquare, who needs to check in on a South by Southwest app? Coburn acknowledged that he isn’t totally sure where the industry is going, but he noted that the success of Facebook hasn’t stopped build-your-own-social-network service Ning.

RateItAll’s audience has grown to 1.4 million unique monthly visitors, and it “just missed profitability” for the last few quarters, Coburn said. It has raised $1.4 million in funding.