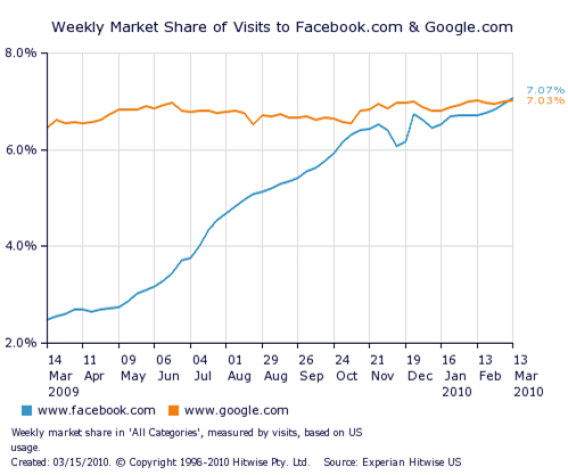 Facebook is now the most popular site in the U.S., according to analytics firm Hitwise. In the week ending March 13, 2010, Facebook surpassed the previous most popular site, Google, in terms of overall traffic for the week.

Facebook sat at 7.07 percent for all U.S. web traffic, whereas Google was at 7.03 percent. Looking at the graph above, it’s clear that Facebook has seen a steady rise in traffic since last year. Traffic to Facebook increased 185 percent compared to the same week last year, whereas visits to Google increased only 9 percent.

In early 2008, there were reports of Facebook’s traffic plateauing, but now it doesn’t seem like the site needs to worry about that too much. I would attribute the major rise in Facebook’s traffic in 2009 to the release of Farmville in June, and similar social games throughout the year.

Looking at the graph above, there’s a distinct rise in traffic starting in June. In late August, we reported on Zynga’s claims that Farmville was the fastest growing social game ever. In little over two months, Farmville had acquired over 11 million active users. As of today, the game has over 83 million active users.

Compared to the rise of social games on Facebook, there was little happening at Google to encourage traffic growth.

Comscore, another analytics firm, still ranks Google ahead of Facebook. Google is the top site by reach at 81 percent of the U.S. population. Facebook sits behind Google, Yahoo, and Microsoft at 53 percent, according to TechCrunch.