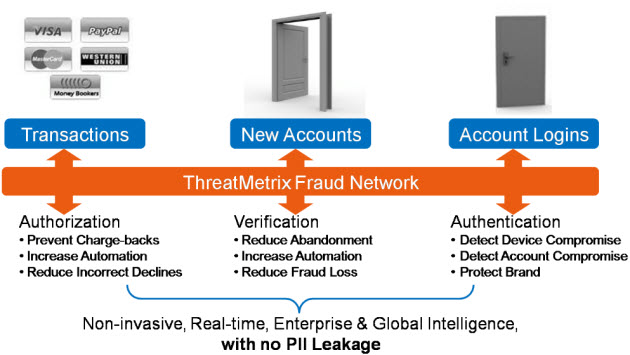 ThreatMetrix is announcing today that it has launched the ThreatMetrix Fraud Network, a service that protects e-commerce companies and social media firms from online fraud.

The service uses a number of technologies to detect fraud. For example, it can recognize devices — computers, laptops or phones — that are being used to log into a site. It associates some 200 characteristics of the device with a user and then decides whether there is any fraud involved. Then it helps the customer decide whether to proceed with transactions related to payments, logins, or the creation of new accounts.

“We can stop first-time fraud, recurring fraud, and validate returning customers,” Taussig said in an interview.

ThreatMetrix also uses a variety of device and transaction-related data to build a “contextual score” that delivers enough information to make a decision about authorizing a user. It can thus verify customers, authorize transactions and authenticate users.

ThreatMetrix has more than 100 customers for its device identification technology. But now it is launching a full-blown service for a broader group of customers who aren’t as savvy about authentication practices. Among the customers are MyYearbook and Academics Direct. Academics Direct said it was able to reduce fraud by 80 percent using the technology.

Taussig said revenues have been doubling quarter-over-quarter since the launch in January, 2009. Revenues are expected to be in the $5 million to $10 million range this year. The company has 34 employees and has raised $12 million in several rounds. Investors include the Australian government and U.S. Venture Partners. ThreatMetrix was founded in 2006. Its rivals include Iovation.