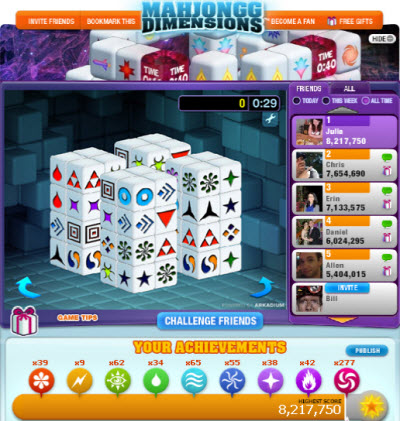 Lots of casual game companies are trying to adapt to the popularity of social games on Facebook. They’re busy re-engineering games from casual game web sites to run on the social network, often without success.

But Arkadium has scored a hit with its very first Facebook game: Mahjongg Dimensions, jointly developed with social game developer Mob Science. Since its launch on Jan. 15, the game has generated more than 1 million monthly active users.

About 4.6 million games are being played every day, making it the most popular mahjong game on Facebook. That’s a fast start for a company that otherwise had no presence on Facebook.

Kenny Rosenblatt, chief executive of New York-based Arkadium, said in an interview that the company is starting to prep more of its existing 300 casual games for Facebook. He said that Arkadium studied the Facebook market and launched the game only after it had a good design with a chance to spread fast via viral marketing. The company is making money by upselling consumers to its paid Deluxe version of the game, and it will soon introduce virtual goods and other ways to monetize it. 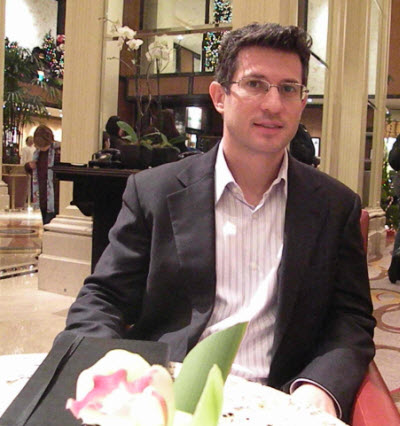 “I didn’t expect the success to happen so quick,” Rosenblatt said. “The plan was to take a game from our library, get it on Facebook, build the audience and monetize it.”

Rosenblatt says the instant success shows that it is possible to adapt a game that is a hit in the casual game market so that it can become just as big a hit on Facebook. Rivals such as PopCap Games have done something similar; PopCap’s Bejeweled Blitz is a one-minute challenge version of the popular casual puzzle game, and it became a hit on Facebook because it didn’t demand much of a user’s time. Rosenblatt says that many of the company’s 300 games have the right DNA to become hit social games.

Making the leap from casual games to social world is critical. The price for casual games played on web sites has fallen from $20 to $7 as more users opt for free games on Facebook and the iPhone. And ad-based games, like those made by Arkadium, aren’t generating as much revenue as before because ad rates have stalled. 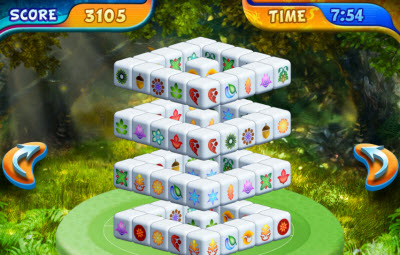 With one successful game, Arkadium has a chance to create more hits through cross-promotion. That’s how formidable Facebook game makers like Zynga have been able to come up with hit after hit. Arkadium advertised the game a little here and there, but it didn’t spend a huge amount on promotion (that’s another way that Zynga generates huge audiences for its games quickly).

“The myth that you have to create a social game from the ground up is untrue,” Rosenblatt said. “If you enhance an existing game to take advantage of the benefits of Facebook, it can be a success.”

Arkadium got considerable help and good advice from its co-developer, Mob Science, which has created Facebook games that have reached more than 50 million users. It knew how to add viral features to the game mechanics, such as restricting game time to a minute, launching leaderboards, and enabling gifts. Rosenblatt said that Mob Science was an amazing partner on the project.

Still, the success of its mahjong game is encouraging for Arkadium, which first announced its plan to move to Facebook in December. Mahjongg Dimensions launched as a 3-D web game in 2009 and is available on many sites that host Arkadium’s games. The company plans to launch five more Facebook games in the second quarter. There are about 15 to 20 games total in the pipeline.

Rosenblatt said the “viral coefficient,” a measure of how fast a game spreads is calculated from traditional Facebook communications: invitations, wall posts, gifts sent, challenges, and other viral channels.

Roseblatt co-founded Arkadium in 2001 with his wife, Jessica Rovello. They grew the company to 90 employees without any venture funding. Their 200-plus games are licensed by companies that want to draw more people to their web sites.