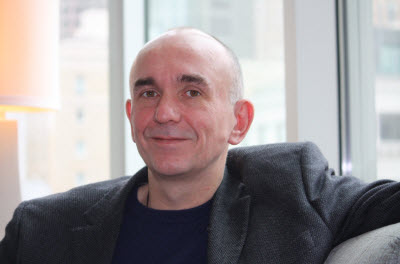 Peter Molyneux , founder of Microsoft’s Lionhead Studios, is an elder statesman of the video game business. His next big game is Fable III, coming this fall to the Xbox 360. He has been making the Fable action-adventure role-playing games for the better part of a decade.

This is a big deal in part because no one waxes poetic about games more than Molyneux, who talks like a Shakespearean actor and wants games to become a recognized form of art. With each new edition of Fable, Molyneux tries to push the envelope and give players a new reason to be engrossed in his game worlds. 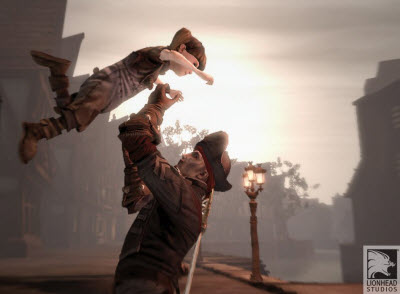 Back in 2001, when he first teamed up with Microsoft, he said games had barely emerged from the “circus tent” era in terms of their maturity as art and entertainment. Nearly a decade later, he says games “unquestionably are an art form” and that the definition of games is expanding.

“In the last ten years, we are just starting to realize the word ‘game’ doesn’t even begin to describe the scope of the experiences that are there,” Molyneux said.

With Fable III, Molyneux hopes to get his hooks into us with more emotional attachment to the characters in the game. The first Fable debuted on the Xbox in 2004 and sold more than 2 million copies. The game let you customize your character to be good or evil based on the choices that you made. You had to deal with the consequences of whatever you decided to do. Fable II hit the Xbox 360 and sold more than 3.5 million copies. In that release, Molyneux made the game more accessible. He kept the story focus tight — the goal was to unseat an evil king — and introduced a companion for players, a dog, that tightened emotional bonds in the game. 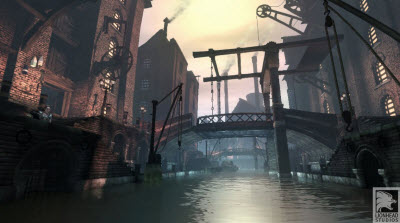 The Fable series was a big reason that Microsoft bought Molyneux’s studio in 2006. It is one of the few big investments that Microsoft has made, even as it cut back on other game efforts, and that speaks to the potential behind Molyneux’s games. The new Fable has a lot of potential for roping in new fans, since there are so many more Xbox 360s in the market now, but Molyneux knows that the game has to be innovative to do so. The game controls are more and more intuitive, and less like a traditional role-playing game.

“If this were the first game in the series, you wouldn’t call it an RPG at all,” Molyneux said in an interview at the Game Developers Conference last week. “We wanted to surprise people, and so we focused on innovation and creating an emotional connection to the world of the game.”

The first major change is try to get the player to feel what it’s like to become powerful. In the story, the hero starts as a nobody, defeats an evil leader, and becomes king. But after that, the player has to start fulfilling promises made to the people who helped along the way.

“After you become king, what happens next?” Molyneux said. 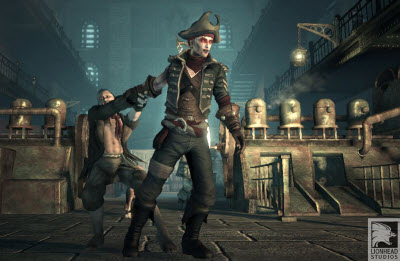 In the town of Biostone industrial, the player has to make important decisions about what to do as the ruler. This time, with Fable III, Molyneux introduces the sensation of touch. That is, you’ll be able to reach out and touch someone. A father, for instance, can hold the hand of a daughter and walk her back home. Or you can grab the hand of a beggar, forcibly pull him to a factory, and sell him to the factory owner. The touch, which you enable by holding a controller button down, can deliver either comfort or pain.

“You can also touch your wife in the game, and I will leave that to your imagination,” Molyneux said.

If you’re thinking that Fable III might take advantage of Microsoft’s new gesture control system, Project Natal, that might be a good guess. 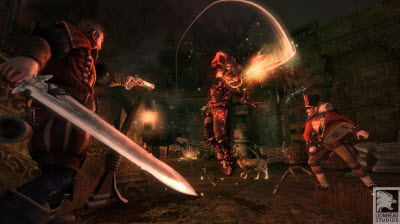 And Molyneux said that the new game has a better combat system. You’ll feel more powerful as your combat experience grows. The weapon you carry on your back gets longer with the more foes you vanquish. If you behave in an evil manner, your blade will be nasty and drip with blood. If you behave in a noble way, the blade will be shiny and look more heroic. There is more depth in the combat, with more variation in the finishing moves when you’re delivering a killing blow.

Molyneux is also revamping the user interface of the game to make it less intimidating. Research showed that 60 percent of Fable II players finished less than half the game. Instead of a traditional inventory for items carried, the player can now visit a guild chamber room where a butler (played by actor John Cleese) waits on the king. You can walk up to a mirror and change your clothes with a single click.

“The idea is to make you feel part of the world,” Molyneux said. “What I want, like a greedy little fat child wanting more sweets, is a few seconds of your mind after you put the controller down. To think and feel emotionally affected by the experience you just had. We want that emotional connection.”