Consequences. The lack of them is something that video games as a medium struggle with. How do you punish players, when they can simply restart from their last save point? This generation of consoles, the term and use of hard saves has become popular. The way this works is, immediately after a player makes a choice, a game will save. This leaves the player with no choice but to continue forward in the game, unless they feel like restarting the entire game (or they're a PC game player and likely have lots of saves). Heavy Rain does this and takes the concept even further.

Grand Theft Auto IV got a lot of credit two years ago for these hard save choices, when really if the players were playing the character of Neko the way he was written (a problem with open world games), the choices would have been simple. The choices in Grand Theft Auto IV felt like choice for choice-sake, rather than being a natural extension of the characters personalities. Heavy Rain is more than a series of Playboy-X or Dwayne choices. The choices in Heavy Rain are almost never easy and are filled with consequence. How so, you ask? To answer that, we need to talk about how it is exactly that Heavy Rain plays.

The primary game play in Heavy Rain could be described as a series of quick time events. Quick time events became popularized back in 1983 with the release of the arcade game, Dragon's Lair, which was a game that was basically an animated movie (animated by famous Disney animator, Don Bluth) with a series of button presses. If you missed the button presses, a humorous animation would show up, showing various ways the hero of Dragon's Lair Dirk would be killed. Today, quick time events could be described as a series of spectacular movements by the character the player is playing, that can't be done with the normal, limited controls available. This type of quick time event was popularized with the release of the 2005 PlayStation 2 game, God of War. 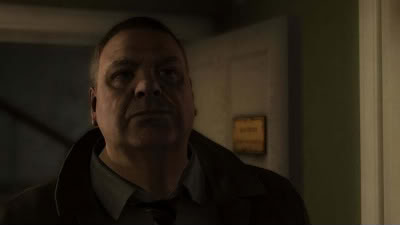 It's safe to say that if you have played a video game in the last five years, you have encountered a variation of this mechanic. Now take the quick time event idea and imagine that if you miss a button press, the game doesn't start you over from the beginning of the quick time sequence, rather the character you have spent hours playing as and become attached to, could die. The game continues, but the character doesn't survive. That's what Heavy Rain is. This lends a sense of weight to the game and your every action and decision the player makes, because the player gets invested in and cares about the characters in this game.

Emotion is another thing games struggle with. You need an emotional attachment to care about any fictional character in any medium. The reason games get this wrong so often is because of the blank canvas effect. Game designers, creators and writers want anybody to pick up and be able to play a game and the main character. So what games typically do is give you a character that is, a blank canvas. They're nothing. They might give you minor details as to where this person came from, but that's about it. Examples of this are Master Chief from the Halo series (yes, I know he has a good back story, but that's expanded universe stuff, which doesn't count in my opinion, tell the story you're wanting to tell in the game). It's not because of the deep, emotional attachment the two characters have that makes the player want to reunite Master Chief and Cortana in Halo 3, it's Marty O'Donnell's sweeping score.  The ultimate example of this is in BioWare's Mass Effect series with the main character Shepard. Shepard is nothing but a blank slate, all the way down to the player being able to choose Shepard's sex at the beginning of the series. Heavy Rain has made me discover that this is no longer what I'm looking for in a game. Make me play as a character. I want to be asked in a story based game, "This is who this person is, now how are you going to effect their life?" Heavy Rain comes so close to getting this right.

There are several things that hooked me into this game, pretty much from the moment I knew of it's existence. The first is that I love Quantic Dream's previous game, Indigo Prophecy, it's faults and all. The second was seeing "The Casting", the video they used to announce the game and show off the technology they had created. That video at the time was literally jaw dropping. All through pre-release my hype was building because of those two things and finally, with the release of the game, it was the experience of the game.  In everything from the atmosphere, to the mostly realistic situations, to the gameplay, to the maturity of the content, to the consequences of the actions I chose, to the emotion. It's a game that when I was away from it, I couldn't wait to get back to see what happens next and I'm not sure I've ever felt that way about a game before. 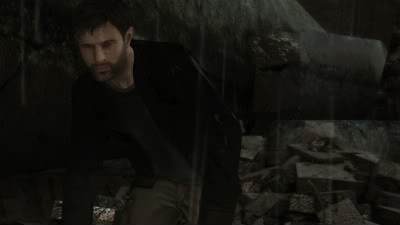 Emotion and character are the key aspect to Heavy Rain. Unlike Halo where the music is the primary thing to get you to care about the game, the music in Heavy Rain, like any good score expands on the characters and the emotions that they're feeling. While the game never made me even do as much as tear up, it did get me to care about the characters in a way I'm not sure I ever have in a game. I'm not saying anything weird like I felt like I knew these characters or anything like that, more along the lines of I enjoyed the characters and their situations the way you would a good movie or book. I cared when they hurt, from emotional or physical pain and like in other forms of media, I was rooting for the characters to get their happy ending.

I know the argument could be made that all of the characters are nothing but a cliché and that is probably true. To that argument I say, so what? Character in Heavy Rain is dramatically better than ninety-eight percent of other video games, with the only real challengers I can think of off-hand, would be the characters in the Half-Life series, the Uncharted series and maybe the Metal Gear series (to the wacky extremes). If we want to talk clichés then let's talk about game clichés.  Heavy Rain isn't a game with bald space marines fighting an alien species that has humanity on the brink or a game with a cute mascot jumping on the heads of enemies. Right there I think I had to have described eighty percent of games. I think credit should be given to Quantic Dream for breaking out of the usual mold, even if it is only to sidestep into CSI or Criminal Minds territory.

I also think you can't just take the characters at face value, because I think through the actions of how you play the game you could infer quite a bit. For instance and this is where the light spoilers are going to come in, take the character of Ethan. Living up to the question that drove the marketing campaign, "How far would you go to save someone you love?", I played Ethan as someone who had lost control, who was reckless and I chose every reckless option that was available to me. The game never told me Ethan was reckless, but that's how he acted in my play-through of the game. Madison, I think you could infer that she is a lonely individual, who wants to be loved at such a high cost. Again, the game never comes right out and tells you that Madison is lonely, but through her actions you could guess that. I'm not saying those things are there, but if they are, how many games could you say have something like that in it? 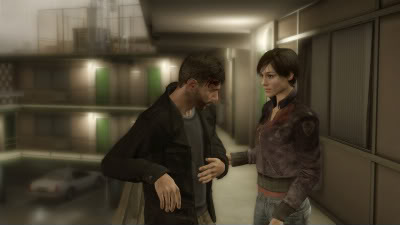 That's not to say the game is perfect and while I won't spoil who the Origami Killer turns out to be, I will say that it left me feeling unsatisfied. In that I mean, I don't think in terms of the story-line that the game gave me everything that I was hoping for before the release of the game. It's an improvement for David Cage and Quantic Dream over Indigo Prophecy, but this isn't going to be the game that pushes gaming completely into the mainstream. The story just isn't good enough. If I had any advice (and anyone would care!) for David Cage and Quantic Dream, it would be that they need to take a page out of Valve's (developer of the Half-Life, Portal and Left 4 Dead series) book and hire an actual writer (I'm available) to handle and guide the plot and character.  The problem is that I think if you put any thought into analyzing the plot of Heavy Rain, it collapses in on itself. I think Cage has great ideas and is good at setting a story up, but like many writers he struggles to seal the deal.

It is an improvement for them, but while it doesn't have the massive flaws that Indigo had (which I actually liked), it comes so close and then drops the ball in the end-zone. The reason that this is so disappointing is that they had plenty of time to see the flaws in the story (the game was announced before the release of the PlayStation 3 at the 2006 E3 Sony press conference) and after David Cage had talked so openly about failing in the plot of Indigo, you just couldn't help to hope he had gotten it right.  In spite of its flaws, I'm not going to lie. Heavy Rain opened my eyes as to what a video game can be. Where it may not have delivered on a story level, the experience and game-play met my expectations and then some. I honestly feel like Quantic Dream could be the company that makes something really special and gets people to notice video games that don't play them, but they're not there yet.