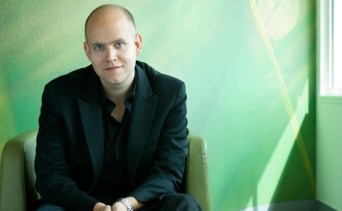 European music streaming service Spotify now has 320,000 paid subscribers, said chief executive Daniel Ek, speaking at the South by Southwest Interactive conference in Austin today. But he couldn’t give a firm date on when the service would come to the U.S.

The service, which launched in 2008, now has 7 million users across countries like the U.K., Sweden and France. The company is trying to change existing models of music consumption by offering free, advertising-supported access to streaming songs. A premium version is available for around $15 a month, depending on the exchange rate of each country, which includes a mobile app that caches songs and playlists.

He said that the U.S. version might be “slightly different” from the European one, suggesting the company is still having trouble securing the appropriate rights agreements to bring a free version to the States.

He later gave a more detailed answer after being asked by an audience member.

“The most important thing when it comes to the U.S. launch is that we want to build the best product possible and get all our ducks in the row with the publishers,” Ek said. “In Europe, we’re sort of used to doing a deal with a collecting society and a couple publishers. But here you have to strike deals with 5,000 publishers or more. And then the collecting societies. And then the labels. It’s a huge task. The big thing for us right now is the next generation of Spotify.”

One more update with detail on Spotify’s relationships with the labels: (Ek gave a much more detailed answer in response to a different audience question even later during the keynote.)

“I’ve been dealing with U.S. labels from the start. It’s not a new relationship to Spotify. What makes this an interesting market and why it takes a lot more time is that this is the world’s biggest music market. We have the potential reach of 170 million people in Europe. North America obviously has 300 million people. When you look at the online population and how much people spend on music, it’s considerably higher here.

The industry is looking at new revenue opportunities and are generally positive on them. But nothing in digital has really been able to counter the decline in traditional revenue sources. People are looking at how can we support Spotify and help it find growth. But they’re also concerned with how to ensure that people don’t stop buying CDs. There’s early evidence of this sort of success with 320,000 subscribers. If you also look at Sweden, between 15 and 18 percent Swedish population actually uses Spotify. The music industry revenues are up there. Legal music revenues are up. Everything is up. It’s only a few percentage points but it’s up.

In the U.K. market, we’re seeing the same thing. Online music is growing rapidly. Spotify is a large part of that. I just think that this is a new phenomenon. The music industry has used the freemium model. We are seeing a lot of support. It’s just about getting our ducks in a row.”

Instead of giving specifics about the U.S. launch, Ek focused on how the company might adapt to the rapidly developing smartphone marketplace. He demonstrated a version of Spotify on an Android-based Sony Ericsson phone. He started to browse the phone and found a South by Southwest themed playlist. It could slide up-and-down album covers and work in the background. A mini-player appeared on the phone’s screen that allowed you to play, fast-forward and rewind songs.

“We’re never going to be content with just an app,” Ek said. “We tend not to take the web approach by releasing early and often. When it comes to key functionality, we spend a lot of time developing it.”

He also alluded to Spotify availability on a number of devices including set-top boxes and home music players.

“From Spotify’s perspective, I think music is the most social object there is. If you can access music from all these different devices, I think a lot of hardware manufacturers are going to want to add this,” he said.

Ek talked about the changing realities of the music industry and said that profit will come from a variety of business models.

“People will pay. They will either pay with their time through targeted advertisements and we’ll see results through that. Or they’ll pay with money,” he said. Ek said that the company’s advertising was becoming more promising as agencies switch their marketing budgets toward online properties.

He added that Spotify could be one avenue to monetization by introducing fans to new artists, allowing them to pay for more on top of commoditized tracks.

“What I want is a special edition or an album for the artists that I really like,” he said. “I’m more than happy to pay $100 for a set with good notes. Another person might be willing to pay for a live edition with extended tracks. A third person might be willing to pay for live events. The reality of the music industry today is that there isn’t one business model. It’s about how to use downloads, subscriptions and merchandise to make money today.”

Ek said the challenge today is helping artists find an audience amid all the other entertainment options vying for consumer attention.

“With all the noise, how are you as an artist going to get heard?” he said. “These are the questions that need a lot of thought. I won’t say that Spotify is not the answer. We want to be a platform where artists can reach out to audiences.”

Interestingly, he said that he viewed Apple’s iTunes store as having a freemium model too.

“The vast majority of people’s libraries are free from Limewire or trading through friends. And then there’s a small portion of tracks that they’ve bought,” he said.

When asked about Apple’s future direction, Ek pointed out that the company was moving toward cloud-hosted music, but said it might not be on the front burner for them. (Apple acquired music streaming startup Lala in December.

“They recognize that we’re moving toward a more cloud-based model, but I’m not sure they’re as committed to a subscription model like we are,” he said. “It makes a lot of sense for them to do something. I don’t know how high of a priority it is for them. I don’t have any magical insights into Apple. If I did, I wouldn’t be sitting here.”

Ek elaborated on Spotify’s business model, saying a paid version would be key for the company. Ek stressed that Spotify couldn’t exist on advertising alone.

Still advertising comprises one revenue stream for the company on top of paid subscriptions. He said by studying music preferences, Spotify could offer personalized advertising. Ek said music tastes often coincide with preferences for other physical goods. For example, he said, if you target a user with a BMW or Audi ad, chances are high that another user with the same taste in music will prefer the same car model.

“That’s an interesting question. We want to make the most user-friendly product there is,” Ek responded. “I think we can protect the content and give users the flexibility they want. The old days when you were told that you could only use this on three computers — those days are gone.”

Ek strongly defended his current business model of offering both free and premium access to users, adding that a major inspiration to him was Napster.

“I really believe that if music could be legally available on any device that you wanted… I think the music industry would be radically bigger than what it is today,” he said to applause.

He pointed out that record labels and lawyers weren’t the only barriers to this vision, but that device or platform-specific standards had hindered development as well.

“It’s easy to blame the music industry, but we’ve also had a lot of proprietary standards in the technology industry as well,” he said. “However, with inventions such as Android, Chrome, Chrome OS, iPhone OS, even the Blackberry OS, I think we’re making progress toward making software open.”

When asked whether Spotify would go in a more of a social networking direction, Ek said the company would stay focused on music.

“We never want to be a social network ourselves. We’d rather piggyback on their networks to help with discovery,” he said.