3D television is a hard sell considering how little 3D content is available for viewing and how expensive the newest gear is. But retailers and manufacturers are starting that hard sell anyway.

“This is a breakthrough moment, a defining moment for the industry,” said Panasonic Consumer Electronic’s Senior Vice President Bob Perry this week. 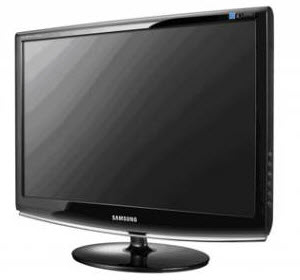 Last week, flat panel 3D HDTV sets from Panasonic and Samsung hit the market, and they’ll soon be joined by similar releases from Sony and others. Will customers run to retail outlets to buy HDTVs capable of producing a 3D picture? It’s still early to say, but the feature might not initiate sales on its own.

The price of a 3D HDTV is comparable to a non-3D HDTV, but manufacturers are putting 3D mainly into high-end models. The sets seem like they’re expensive now because they’re being bundled with other features only included in more expensive TVs. There is, also, the added cost of 3D glasses. But the idea is to market 3D as one more feature in a TV that is full of other features that consumers want.

“This TV is a fabulous HDTV all the time,” said Michael Vitelli, Best Buy president. “It’s ready when a customer wants to go.”

Of course, consumers may not be able to tell the difference in quality. A 46-inch Vizio non-3D LCD TV sells for $1,028 on Walmart.com. A Samsung 46-inch LED TV with 3D sells for $3,599. The Samsung has much better picture quality, but is it enough to justify that kind of price tag?

Packages seem to be a big push for manufacturers. They’re often throwing in a 3D Blu-ray disc player and a pair or two of 3D glasses as an incentive. Samsung will offer a free 3D Starter Kit with two pairs of glasses and a copy of the 3D version Dreamworks film “Monsters vs. Aliens” on Blu-ray with the purchase of qualifying 3D HDTV sets and 3D Blu-ray players. Panasonic throws in a pair of 3D glasses. Additional pairs of active shutter 3D glasses run about $150 to $200. For a family of four, that means it could cost $600 to $800 for a family night at the movies in a 3D HDTV home. 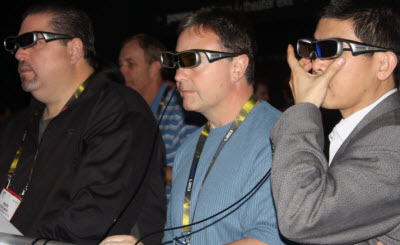 Market researcher DisplaySearch estimates 3DTV revenues could hit $22 billion by 2018. DisplaySearch forecasts the market for 3D-ready TVs will grow from 0.2 million units in 2009 to 64 million units in 2018. 3D-ready TV will be the largest application in terms of revenue in 2018 with $17 billion, the company says. And the market for 3D-ready computer monitors will grow from 40,000 in 2009 to 10 million in 2018, when they will constitute 3.6 percent of monitors sold. There are roughly 150 companies participating in the market now.

But the hardest thing will be to sell the first sets. Customer demonstrations seem to be key to raising awareness of the technology. Manufacturers and retailers agree customers have to see 3D in a retail or similar setting, rather than simply reading about it online. Best Buy plans to display its 3D sets, including those from Panasonic, in its Magnolia section (within Best Buy stores) at first, and will move displays to its sales floor once adoption picks up. In addition, Panasonic kicked off a 15-city tour featuring demonstrations of its first full HD 3D TVs, 3D gaming, Internet-connected TVs, and LUMIX digital cameras. Cities on the road show include New York, Los Angeles, Chicago, Atlanta, Boston, Dallas, Detroit, and Minneapolis.

Demonstrations are crucial to drive awareness, but they’re only one piece of the equation. Manufacturers are also relying on the availability of content to push sales. Panasonic forged partnerships with DirectTV (which will begin broadcast of three channels in 3D as early as June) and Twentieth Century Fox Home Entertainment. Fox is ready to release “Ice Age: Dawn of the Dinosaurs” next month, its first 3D Blu-ray. Samsung has partnered with Dreamworks to support its hardware release with content.

Even with partnerships, content remains a deterrent to adoption. Certain sets from Samsung, Sony, and other manufacturers will convert 2D images into 3D. Panasonic sets will not convert standard and high-definition content to 3D, which limits content new owners have available to a handful of Blu-ray movies and three channels from DirectTV this summer.

Glasses can be another issue for early adopters. Each 3D HDTV manufacturer uses its own glasses, or that of a third party such as NVidia, which creates compatibility issues. This means retailers could have difficulty displaying televisions side-by-side for comparisons. Additionally incompatible glasses could cause confusion for consumers who bring home additional 3D glasses. That issue could be addressed by XpandD as early as this summer. XpanD’s X103 universal active 3D glasses will be compatible with any 3D TV or 3D-ready content. A price is not yet set, but the glasses are expected to cost between $125 and $150.