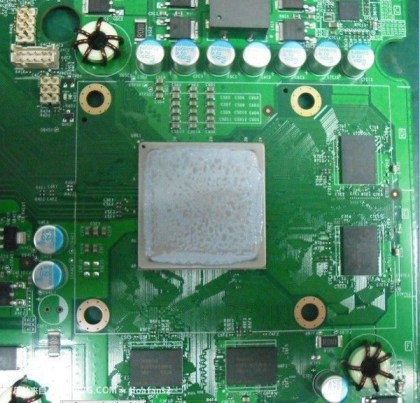 Microsoft has long been rumored to be working on a combination microprocessor-graphics chip for the Xbox 360 as part of a move to create a slimmer game console.

Now some evidence has surfaced that the code-named Valhalla chip is done and a new model of the Xbox 360 with a redesigned motherboard (main circuit board) is near. A Chinese web site published photos of a motherboard with what appears to be a central processing unit (CPU)-graphics processing unit (GPU) chip.

Such a chip would get rid of a major cost in the system and allow Microsoft to make the console smaller. The company sorely needs that, since Sony launched a redesigned PlayStation 3 Slim in August to great success. But the combo chip isn’t an easy thing to pull off, in part because IBM makes the CPU and Advanced Micro Devices makes the GPU.

Microsoft declined to comment. The company never alerts users to these kinds of upcoming changes, unless there is a cosmetic difference. Most of the time, the box stays the same and maybe the price is changed. The company originally planned to introduce a motherboard cost reduction every year and major change in chip designs every two years. That generally matches advances in semiconductor manufacturing technology. But this cycle has turned out to be very different than past console cycles.

Also, just because there are pictures surfacing now doesn’t mean that a launch of a new, slimmed down console is imminent. It often takes months of testing before new devices are introduced into the market after a big design change.