Yahoo dips into social game space with Citizen Sports buy — Yahoo announced that it is acquiring Citizen Sports, a company that offers sports-related applications for the iPhone and Facebook. The search engine says that the deal will boost to its already popular sports vertical by giving it a presence across more platforms. According to an interview on paidContent, Yahoo has felt left out of the conquest of Facebook, which is quickly becoming the epicenter of online fantasy sports. Both Yahoo and Citizen sports have fantasy football apps for the iPhone today, which will be merged into one, superior version, the companies say.

When VentureBeat asked Kevin Compton, founder of Radar Partners, an investor in Citizen Sports, how the startup made out in the deal, he said, “We did very well,” indicating that it sold to Yahoo for a nice profit.

Doerr defects from Amazon board — Kleiner Perkins superstar investor John Doerr announced that he is stepping down from Amazon.com’s board of directors. A statement released later said he wants to spend more time working on new ventures. TechCrunch speculates that the decision had nothing to do with time constraints, but rather conflict of interest. Doerr is a big and early backer of Google, which offers some services that compete with Amazon.

Fisker Automotive projects $8B in revenue by 2014 — Henrik Fisker, CEO of the company that makes the luxury plug-in vehicle called the Karma, says that the company will hit a staggering $8 billion in revenue by 2014, with earnings reaching $1.2 billion, according to Dow Jones VentureWire. Fisker plans to produce 14,000 cars next year, with each selling for $88,000 after rebate. It’s second wave of cars, under the banner of project Nina, will include two sedans and an SUV, and will bring in $5.34 billion by 2013. These are pretty ambitious numbers, but the company has had a string of recent wins, including a $529 million loan via the U.S. Department of Energy, and $250 million in private funding — including $25 million raised last week.

Hacker makes 100 cars stand still in Austin — South by Southwest may have overtaken Austin, Tex., this week, but a hacker successfully froze cars in their tracks with a vehicle-immobilization system, typically used only on cars when owners have missed payments. The culprit turned out to be a disgruntled employee let go from a local dealership. The system used to brick the cars, called the Webtech Plus, consists of a small black box installed under vehicles dashboards, and a web interface that can be toggled to turn off cars’ ignitions remotely. Wired has the story.

AOL launches fund for local startups — The internet company announced that it is raising $10 million for a new venture capital fund targeted at startups described as “hyperlocal.” The new fund will fall under the jurisdiction of AOL Ventures, which already backs 40 such companies. It wants to add at least 15 more to its crop. Tangentially related, AOL will also launch online entertainment guides to 25 new cities in the U.S., drawing on sources of extremely local data. 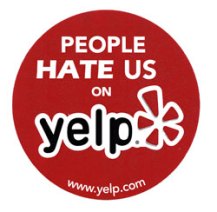 Yelp still in hot water over extortion — The popular review site is being sued once again by a vendor for falsely representing itself as an objective source of ratings and comments. The plaintiff in the new case, Renaissance Furniture Restoration in San Francisco, alleges that Yelp deleted positive comments from its Yelp page when it refused to buy advertising on the site. This is the third lawsuit being filed over the same reasons, including one from D’ames Day Spa in San Diego, and a class action suit filed by two law firms in Los Angeles, that has since been joined by a bevy of small businesses. Looks like simple denial isn’t going to be an option this time.

Augmented reality for your car? — General Motors is experimenting with augmented reality features built for vehicles. Examples given, include circling or lighting up your destination on your windshield when it appears in the distance, and alerting you to potential dangers on the road. The automotive giant says the these new features could help people drive in dangerous conditions, like fog or darkness, while simultaneously providing advanced GPS navigation. The system could eventually track driver head and eye movements to see where they are looking at any given time.

Social networking features come to Apple’s iWork — Now people who use Apple’s suite of document programs, iWork, can share their work via social networking sites on the internet like Facebook and Twitter. Bascially, every document can be posted as a public link. Apple has also revamped the iWork interface so that it works better on the iPhone.